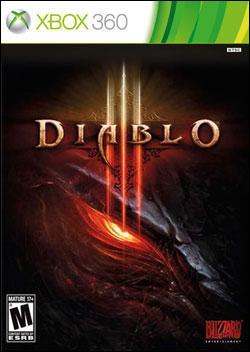 For decades the Diablo games have been exclusive to the PC platform. This has always been a source of tension between gamers as those on their consoles felt neglected and ignored by Blizzard. Not any more though. Recently, Blizzard has finally granted the wishes and answered the prayers of millions of gamers around the globe by bringing Diablo 3 home to the Xbox 360.

Originally launched on the PC platform, Blizzard has had a challenging time trying to convert the game from keyboard and mouse to dual thumbstick controllers. The interface as well had to be adapted for console users, and all of this and more had to be polished and perfected if the transition were to be a success. So, has Blizzard vanquished the demons of hell back into their abyss, or has the challenge of converting an iconic PC game series proven to be the games own demise? The gate of hell hath opened once again, and hell hath no fury like Diablo 3.

While managing the plot was relatively an easy task to do, the entire gameplay mechanics of Diablo 3 were a much different story. Starting off Diablo 3 will allow you to play offline instead of requiring an always online connection, but that is just one grain of sand in a desert. To truly overcome this monumental obstacle, Blizzard has decided to do two things: 1) keep it simple, and 2) keep it streamlined.

This innovative thinking is the driving force behind the smooth user interface and allows for a perfect transition from PC to console gaming. To access your characters inventory, skills, and more all you need to do is press one button and a radial menu system pops up where you can designate what items you want to equip, what spells you wish to use, and more. Your gear is still ranked via different colors and effects, but with the simple press of the X button you can compare newly acquired pieces of gear and weapons to what you already have equipped. There is also an option where you can "auto equip" weapons and armor however, that becomes rather moot when you factor in the crafting of your own gear in this game.

There is also an inclusion from the PC called "Elective Mode" where you are able to map any power to any button so you can start to customize how you want to play the game. Using the left thumbstick to move, your right thumbstick plays the role of your dodge move where you can press it in eight different directions to avoid enemy attacks at will which helps you keep out of danger while maintaining your attacks and thanks to a lock on system, deliver them with pinpoint accuracy. It can be said that without a doubt Diablo 3 on the Xbox 360 provides one of the best game play mechanics we have seen on a console to date.

All of this talk about weapons, armor, and other gear is the result of Diablo 3's strong loot system. We discover that the gear that is dropped will be slightly more suited for your character, which may not be so good if you're looking for gear for a friend, but really good for your own character. To hold all this loot we are now given 60 item slots and with a more uniformed storage system, the focus shifts less towards the weight carried and instead on hunting for rare and more powerful loot.

When you manage to find some new gear it will appear as starred in your inventory and if the new item provides you with increased stats in any field, you will see up and down arrows indicating the increase or decrease of your character's stats based off that item. Even though you can go through Diablo 3 on your own, the real fun is when you get a group of people hell bent on vanquishing demons and collecting rare loot and that is thanks to the brilliant multiplayer system.

Diablo 3 on the Xbox 360 supports both two to four local co-op and two to four online co-op as well. So, now instead of your friends coming over all the time and eating all your food, drinking all your drinks, you can enjoy four player co-op from the solitude of your very own couch. If you do decide to have friends over, you will find that the screen is locked so that all four players are on the screen at the same time, and if someone should happen to venture off from the group, they are teleported back to where player one is located. This is essential to keeping the pace of the game moving forward. All of this multiplayer perfection is also easy to customize so creating a private, public, or party match can be done with tremendous ease. Diablo 3 for the Xbox 360 is a perfect example of how multiplayer should be done.

Even though Diablo 3 on the Xbox 360 is an amazing title, there is though one area where the PC world will always dominate, and that are the graphics. Now consenting that a PC rig will always dominate the console markets in the graphics field, the Xbox 360 does hold its own and only suffers based off of local co-op play. When you have four characters locally on one screen and the action heats up you can see a slight drop in frame rate, however, the game feels smooth as silk when you are online.

When running at 1080p, the lighting looks absolutely amazing and there are only a few hiccups in the graphics department, but when you are running at 30fps, your eyes will thank you. Thankfully this graphical adaptation also means that the haunting score of Diablo 3 makes another triumphant showcase. Not too many gamers will invest many hundreds of dollars in a sound system for their PC, however, if you have an Xbox 360 hooked up to your TV, then there's a good chance you either enjoy listening to your games via a high end headset or home theater system which ultimately is the way you want to hear Diablo 3.

When it comes to dungeon crawling, loot collecting, boss killing action, there are few titles that can stand up to the Diablo games. Blizzard though has gone above and beyond expectations to deliver a final product that will literally drain hundreds of hours of your life away. We said it before that Diablo 3 was one of the best gaming experiences found on the PC, and now we can say that Blizzard has produced one of the greatest gaming experiences found on the Xbox 360. The question isn't, "should I pick up and play Diablo 3?", instead the question is "what could possibly be the reason to ever stop playing?" Make no mistake, there's a special place in hell for those who pass on Diablo 3.

Available now, an exclusive additional pack of Beretta weapons, the oldest known firearms manufacturer in the world, will allow the players to extend their collection in-game.

The Falconeer Boasts a Minimum 4K 60 Frames Per Second, Features HDR and Will Take Advantage of Smart Delivery.

A trailer for AWE teased fans with a thrilling first look at Jesse’s venture deeper into the Oldest House, including learning more about the disappearance of the writer Alan Wake.