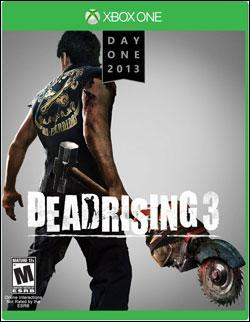 I remember when the original Dead Rising was revealed for the Xbox 360 and was amazed with how many zombies Capcom was able to show on the screen at once (which I think was a few dozen or more, which was unheard of at the time). Turns out it was a hit, was more fun than it should have been to dismember zombies, and had a ton of black humor within as well. Dead Rising 2 raised the bar even further, so naturally when Dead Rising 3 was announced (and as an Xbox One exclusive), I knew that they were going to blow it out of the water given the power of the new hardware."

E32014 PSA: New Dead Rising 3 DLC with a VERY long name is out NOW
Super Ultra Dead Rising 3 Arcade Remix Hyper Edition EX+ Alpha is a new DLC arcade adventure set within the Dead Rising 3 universe; it’s filled with Capcom references and is available now on Xbox Live.
Dead Rising 3 'Chaos Rising' DLC available today
The zombie-slaying fun continues with the release of the third chapter of the â€œUntold Stories of Los Perdidosâ€, and the story’s main character, Hunter, seems to have just as many tattoos as the last one.
Second Dead Rising 3 DLC pack 'Fallen Angel' available today
With all this future news talk, it’s nice to have at least one news story about something you can experience and play TODAY.
Mandatory 13GB patch required download for today's Dead Rising 3 DLC
Dead Rising 3 owners will be happy to learn that the recently delayed "Operation Broken Eagle" DLC originally planned for late December will be available for download later today. However, a sizeable 13GB patch must be downloaded first.
Dead Rising 3 "Operation Eagle" DLC delayed into January
Remember that new campaign DLC that was just announced for Dead Rising 3, due out on Christmas Eve? Looks like we’ll be waiting a tad longer for that...
Dead Rising 3 getting first DLC with new character, limited demo
Dead Rising 3 owners have some new content to look forward to buying, which will star a different character and add new weapons to the mix, but XP that will carry over into the main game. Also, a limited play-demo is coming for the curious out there.
Capcom shows off Dead Rising 3 co-op multiplayer at TGS
Drop-in, drop-out two-player co-op will be a big feature of Dead Rising 3, allowing you to make every playthrough as social or as lone-wolf as you want it to be.
Dead Rising 3 has SmartGlass-exclusive missions
Dead Rising 3 will be one of the first Xbox One titles to incorporate Microsoft’s SmartGlass app in actual gameplay, and may also be the title to push FULL SmartGlass compatibility on devices other than Win 8 phones and Surface (i.e. iOS, Android).
E3 2013: Dead Rising 3 exclusive to Xbox One
Was there ever any doubt? Prepare yourself to see a LOT, and I mean A LOT of ZOMBIES, and some really cool ways to kill them all.

Xbox one no signal
Post by debrartin
0 Replies, 26922 Views