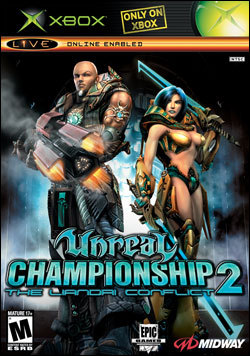 Lately I\'ve been noticing a trend that I?m not liking too much. Games who are innovative, for the sole purpose of being innovative."

Overall: While I'm not a huge fan of FPS titles, this one was pretty good. The addition of melee weapons is fairly unique, albiet it sometimes frustratingly tough to master sometimes.
Gameplay: You get the usual stuff of deathmatch, CTF, team variants of both and overdose which is kind of like a splattery game of tag, sort of. With a fair amount of unlockables and pretty wide selection of characterd with unique abilities, it keeps your attention for a while.
Graphics: Looks pretty good...lighting, outside, wind and water effects are done well, with little to no slow down, this one can put alot on screen at once and keep going. The unique models of each character, while some from similar teams look sort of generic, overall pretty cool.
Sound: The music is forgettable, the weapon sound effects are ok, the taunts and background sounds (i.e. outside, machines, weather) are ok, but get old sooner than later.
Suggestions: While not a bg fan of FPS titles, Unreal usually holds my attention at least for a bit. The frantic face pace is ok, and the "coup de grace" moves" are pretty cool. See what you can do on the next gen consoles.

Overall: This game was a lot better than the first port for Xbox. They built this one for Xbox only and I think they came out on top. I think the introduction of melee adds to the ooverall gameplay. The fastpaced gameplay makes for some intense battle.
Gameplay: The way you can switch form third person to first person is also a new innovation. I dont like how you have to be in third person mode in order to melee, but it is probably much easier. The challenges are hard, but make the game a bit more challenging. If you take this game ont XBOX Live it is a winner. Besides Halo 2 and Rainbow Six 3 i would say this is one of the best. With the introduction of new game modes like overdose and Nali slaughter makes it unique and adds to the overall gameplay by breaking it up. The new characters are also awesome and I like how they added Raiden from the Mortal Kombat series.
Graphics: The visuals are like all the Unreal games and they are pretty good. The cutscenes are amazing and if you slow down eneough the levels are pretty well done. I love the level design in all of the Unreal games and i think that is their stronest part.
Sound: The sound effects are always accurate in these games. I think that they just get better and better. The battle music isn't to noticable because the battle is so intense you dont really notice.
Suggestions: I think that they did a good job with this game and it is definitly not getting enough recognition. The level design and character design is off the hook and i loved all of the cutscenes while playing as Anubis.

Overall: Fast and furious FPS at 60 fps!!! This one is just pure killing stuffs. Better than the first one with completely new melee weapons that add the difficulty to the game.
Gameplay: The main single mode story doesn't matter about a game like this, all you have to do is just killing, MASSIVELY killing. Each time you enter a area, you can choose your character from 16 characters (some are unlocked after completing some objectives), then bring with you a primary and a secondary weapons. Every weapon has his own advantages or downfalls over the others. Every character has also unique abilities that can be unleash if you got enough cells in the area. When you play with bots, i can tell you that the AI is extremely difficult when you play as God mode. So, be prepare for something that really got guts.
Graphics: The graphics are great but not the greatest one. Since you are constanly running no stop, you have no time to check it out every bit of them.
Sound: The sound of each weapon sounds great and when you do a finishing move, hear the ennemy explode in a old-fashion like MK-style.

Overall: The sequel to the Xbox port Unreal Championship.... need I say more? The game includes the new melee and third person perspecctive which wasn't included in the previous game. The engine and graphics have been enhanced also. A few more races of characters have been added and the Adrenaline system has also been refined.
Gameplay: The gameplay wasn't as good as it was hyped up to be, with the new melee system. I oftened found that entire games consisted of only melee attacking.. This takes away from the usual gunfights that Unreal players have come to adore. I found that going back and playing Unreal Championship, it's predesor, was more fun. I think the adrenline is a bit too powerful, one option (The option is called "Nimble") and it basically allowed me to use it and jump across the entire map with the flag and score in a matter of about 40 seconds.. You tell me how that employs fun and exciting gaming.
Graphics: The visuals have been upped since Unreal Championship 1, but 3rd person seems a bit to the choppy side for me.
Sound: The sound is mediocre, I didn't notice many flaws nor anything good either. I am really disappointed.
Suggestions: Ditch the Melee.

Xbox one no signal
Post by debrartin
0 Replies, 28669 Views