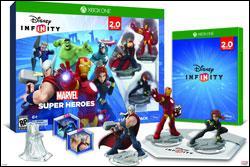 If you have young children that have seen a Disney movie before and like to play games on their consoles, you’ve most likely been made aware of Disney Infinity when it was released a little over a year ago. It’s concept is simple: When you purchase real word toys of your favorite Disney characters, you’re able to play as them within the game, not only in a campaign, but also a freeform Toy Box where you can create any type of game you want with your characters. On one hand you’ve got a great basis for creativity for the youngsters, on the other, they’ll most likely want all of the toys which can add up to a hefty tally once it’s all said and done."