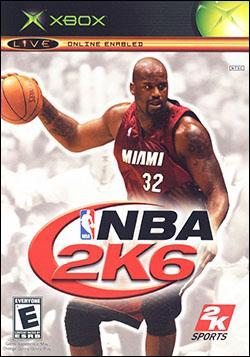 Hit the courts with 2K Sports' NBA 2K6 for the Xbox. With new features like isomotion, amazing graphics, and very realistic physics and player movement, the 2006 addition to the series is one of the best. The changes to the isomotion system are the biggest gameplay tweak gamers will find in NBA 2K6. The turbo button no longer exists. Instead, gamers can use the right and left buttons to modify their players aggression, which can change how the player passes and shoots. These changes include how fast the player is moving, what kind of fakes he does, and how he passes.
Registered Members: 48,506
Forum Posts: 725,913
Xbox One Titles: 2,731
Xbox 360 Titles: 1,086
Xbox 360 Kinect Titles: 95
Xbox 360 Arcade Titles: 586
Original Xbox Titles: 987
Staff Reviews: 2,014
Member Reviews: 10,339
News Articles: 15,599
Screenshots: 33,967
Xbox 360 Achievements: 45,112
Xbox 360 Faceplates: 2,016
Cheat Codes: 1,706