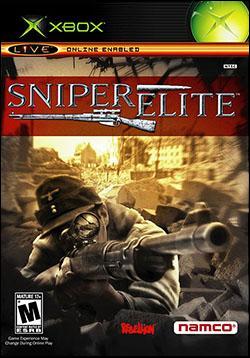 It is spring 1945, and Adolph Hitler is gone and presumed dead. The Third Reich has fallen and the Cold War is just beginning, much to the dismay of the Allied Forces. In the aftermath of the battle of Berlin, German and Russian factions continue to skirmish in the various German suburbs of the capital city."

read more
Spring 1945. The ravages of World War 2 are drawing to a close and the Russians and Germans are locked in furious conflict for war-torn Berlin to steal atomic bomb technology from the German Army. You control the fate of an American soldier, trained as a sniper by the OSS. As a key member of an invisible, yet elite group, you are assigned to the most sensitive of missions. Disguised as a German and working alone, you must infiltrate hostile enemy environments and using your stealth and sniping skills, and stop Stalins's forces from contolling the world's nuclear technology.
Score: 83
Overall User Average: 8.00 / 10 (83.0%)
Gameplay User Average: 9.00 / 10
Graphics User Average: 8.00 / 10
Sound User Average: 7.00 / 10

Overall: The Silent Scope Complete Edition was a great title but is just getting too repetitive after a while. When a mission starts, you already get in the point and just stand there and shoot the ennemies and kill the leader to move in the next one. Sniper Elite is totally different and i enjoy it much more than Silent Scope series.
Gameplay: First of all, this is Second War so don't expect to have some high-tech snipers that can zoom more than 3x. You are elite sniper, well-trained to take out the ennemies in a long range. Each time you enter a mission, you are always equipped with enough stuffs to deal with the ennemies so don't worry about going out of ammo. You can even pick up the ammo and weapons of your victims so that a plus for you. One thing that you must understand is you must be patient. If you run out and shoot everything in sight (you can do that), but that is just useless since the ennemies can kill you with a AK-47 in a second. In this game, you can move your character when you want and where you want until you find a good spot to kill the ennemies. In a mission, there are only few ennemies but i can tell you that there are very smart. They move constantly and can hide everywhere, even in a tiny place. If one of them are wounded, the others will try to carry this one out of your view so try to deal a head shot rather go frenzy mode. You can use some deadly traps like place a grenade with a detonator line so you can kill some of them instantly. When you kill a ennemy in a very long distant with a head shot, you are rewarded by viewing a bullet slow-motion time which will make you look like a professional killer...hmm.. i mean sniper. :P
Graphics: The raining effects is really great compared to other titles. You will see some reflections about the environments in some missions. The facial expressions is a little bit repetitive since the characters won't talk a lot.
Sound: The sound is always there but you can hear some tunes about the Second War history which is jsut make this game so intense in some ways.
Suggestions: A sequel with more missions.