Japanese magazine Famitsu reveals the game in its latest issue, and Andriasang provides the details in English. Max Anarchy is Platinum’s first online title, described as an "online action game with support for large numbers of players".

Screenshots in Famitsu show players using chainsaws and torches, and it also claims Jack, the protagonist from Platinum’s Wii disappointment MadWorld pictured above, is a playable character, though there’ll be no repeat of the hyper-violent 2009 brawler’s visual style.

Max Anarchy is set for release this year, published by Sega. More details are expected shortly as translators get to work on the magazine’s developer interview with Atsushi Inaba. 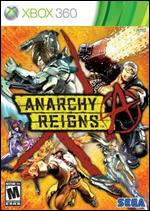