Rise Up and Strike Back as Crytek and Deep Silver Introduce Homefront®: The Revolution

Wage guerrilla warfare and reclaim the streets of Philadelphia in "Homefront: The Revolution" – a captivating new free roam FPS to be co-published by Crytek and Deep Silver.

Coming to Xbox One, the all-in-one games and entertainment system from Microsoft, PlayStation®4, PC, Mac and Linux in 2015, Homefront: The Revolution throws players into a near future dystopia where catastrophic events have brought the USA to its knees and enabled North Korean forces to impose a brutal military occupation. Trapped in this American nightmare, Philadelphia – Birthplace of Independence – has become a police state, where surveillance drones and armored patrols keep her once-proud citizens at heel, crushing any dissent with savage force.

To overcome their oppressors, players will have to engage in guerrilla warfare and use ambush, infiltration and hit and run tactics in thrilling un-scripted firefights. At every turn they’ll find a sprawling city, in which recruiting fellow revolutionaries and building improvised homebrew weapons are just two of the keys to creating a powerful resistance force.

Hasit Zala, Game Director at Crytek, said: "Homefront: The Revolution stands out from the crowd by immersing players in a world where they’ll feel emotionally compelled to fight for their freedom. We’re very excited to work with Deep Silver and deliver an experience that underlines Crytek’s commitment to quality whilst tapping into the huge potential we saw when we first acquired the Homefront IP."

Homefront: The Revolution represents the first time Crytek and Deep Silver have worked together, with the two partners collaborating to release the game as part of a co-publishing arrangement.

Developed by Crytek’s Nottingham studio, Homefront: The Revolution harnesses the latest features of Crytek’s CRYENGINE technology. On the ground, players will encounter an environment that looks and feels truly alive as day turns to night and storm clouds come and go – an authenticity that extends to the strikingly lifelike expressions, skin and clothing of everyone they encounter.

To find out more about the Homefront: The Revolution, and to watch an all-new trailer showing the game in action, visit www.homefront-game.com.

Make sure to check out the Xbox Wire Staff interview with Crytek’s UK Associate Producer Fashat Salim at the bottom follwing this press release!

Deep Silver develops and distributes interactive games for all platforms. The Deep Silver label means to captivate all gamers who have a passion for thrilling gameplay in exciting game worlds. Deep Silver works with its partners to achieve a maximum of success while maintaining the highest possible quality, always focusing on what the customer desires.

Deep Silver has published more than 200 games since 2003, including its own brands like the open world extravaganza Saints Row, the zombie action franchise Dead Island, the grim post-apocalyptic future of the Metro series and action packed role-playing from the Sacred world. Upcoming highlights from Deep Silver include Dead Island: Epidemic and Sacred 3. Deep Silver also owns the development studios Deep Silver Fishlabs in Hamburg, Germany, and Deep Silver Volition based in Champaign, IL, USA. For more information please visit www.deepsilver.com

Koch Media is a leading producer and distributor of digital entertainment products (software, games and films). The company’s own publishing activities, marketing and distribution extend throughout Europe and the USA. The Koch Media group has more than 20 years of experience in the digital media business, and has risen to become the number one distributor in Europe. It has also formed strategic alliances with numerous games and software publishers: Bethesda, Capcom, Kaspersky Labs, NC SOFT, Sega, Square Enix and Tecmo-Koei, etc. in various European countries. With Headquarters in Planegg near Munich/Germany, Koch Media owns branches in Germany, England, France, Austria, Switzerland, Italy, Spain, the Nordic regions, Benelux and the United States. www.kochmedia.com

Crytek GmbH (“Crytek”) is an independent company at the forefront of the interactive entertainment industry, and is dedicated to pushing the boundaries of gaming by creating standout experiences for PC, Xbox One, PlayStation®4, Wii UTM, Xbox 360, PlayStation®3, iOS and Android using their cutting-edge 3D-Game-Technology, CRYENGINE®.

Since its foundation in 1999, Crytek has consistently been recognized for excellence in its field, earning accolades such as the 2011 Develop Award for Best Independent Studio, and two Red Dot Design Awards (in 2010 and 2013). Its multi-award winning games include Far Cry®, Crysis® (awarded best PC Game of E3 2007 and Best Technology at the 2008 Game Developers Choice Awards), Crysis Warhead® (awarded Best Graphics Technology at IGN Best of 2008 Awards), Crysis® 2 (awarded Best Shooter of E3 2010 and Gamescom 2010), Crysis® 3, Ryse: Son of Rome and Warface (awarded Best Social/Casual/Online Game of Gamescom 2012). For more information, please visit www.crytek.com.

“PlayStation” and “PS4” are trademarks or registered trademarks of Sony Computer Entertainment Inc. All Rights Reserved. 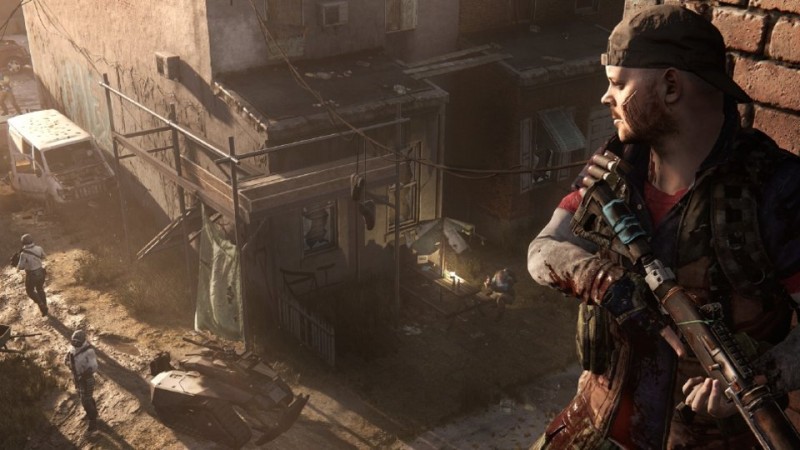 Homefront: The Revolution Developer Crytek UK Opens Up About Igniting an Uprising

If you’ve played the original “Far Cry” or any entries in the “Crysis” series, you’re already well aware that developer Crytek knows a thing or two about crafting epic first-person shooter experiences. Based on Crytek’s Xbox One debut, “Ryse: Son of Rome,” it’s also obvious the studio has a handle on harnessing the power of the hardware to deliver eye-popping visual presentations. Now, the talented team that put players behind the bullets of sci-fi super-soldiers and the blades of vengeance-seeking Romans is applying its skills to “Homefront: The Revolution.” We recently sat down with Crytek UK Associate Producer Fashat Shalim to discuss what direction the ambitious sequel is headed in as it prepares for launch next year.

Xbox Wire: The original “Homefront” presented a terrifying vision of a future-fiction America occupied by a rising military superpower. Does “The Revolution” retain or expand upon this premise?

Fashat Shalim: Yes, we were really interested in the setting and the premise of the original “Homefront.” It was very different from what you find in first-person shooters these days; the prevailing narrative these days is that you’re a badass military soldier, running around the world just shooting bad guys... you are the ultimate machine. “Homefront” kind of flipped this and changed the dynamic by bringing the battlefields to the U.S.; now the combat is in our own backyard. This is a familiar environment, but it’s also changed – it’s alien. So that was something we were really excited about doing. And, using the CryEngine, we were able to take that and push it as far as we could to achieve an open-world that was exciting to play in.

Xbox Wire: On top of the story and setting, how does the premise inform the action and gameplay?

Fashat Shalim: So we’re taking that premise and expanding on it, but we really wanted to take the pillar of guerrilla warfare and focus on what it means to be a guerrilla fighter. And what we came down to are basically things like sabotage and ambush, assassinations... things that aren’t necessarily about taking on the enemy head-on. Rather, you get in, you complete a mission, and you get out as quickly as you can, before they can respond. That’s kind of the essence of what a guerrilla fighter is. The enemy is so far superior to you – they have the big guns. You can’t take them on, so you have to hit them as quickly as you can, and get out of there.

Xbox Wire: Has the Xbox One hardware allowed you to push the franchise in any new directions from either a gameplay or technical standpoint?

Fashat Shalim: Yeah, one of the main things that we wanted to do is push our CryEngine as far as we possibly could, so we decided to go open-world. We’re taking that guerrilla warfare scenario, pushing it into an open-world, and making that world a realistic and evolving place, where things are happening whether the player is there or not. Basically, whatever the player does in the world affects the environment and everyone that inhabits it. So yeah, there is a lot of stuff going on compared to what was in the original “Homefront.”

Xbox Wire: Can you offer anymore specifics on the game’s story or characters? Does it pick up after the events of the original game?

Fashat Shalim: It’s been four years since the invasion. It’s 2029, and the occupation is quite mature. The Korean People’s Army (KPA) is definitely in there; its forces have taken control, and are now ruling with an iron fist.

Xbox Wire: And the KPA has set up its capitol in Philadelphia?

Fashat Shalim: Yes, we felt that the city resonated as a symbol of independence. It’s the birthplace of independence – it’s where the Declaration of Independence was signed. So, from our point of view, it really had a strong significance.

Xbox Wire: What can players expect in terms of presentation and gameplay when fighting evil-doers in the City of Brotherly Love?

Fashat Shalim: If you’re familiar with Philadelphia, you will definitely recognize landmarks and places in our game. But the idea is that it’s Philadelphia, but it’s not quite Philadelphia because it’s been augmented with this KPA stamp. So it’s a familiar environment, but it’s alien at the same time. It’s also an expansive, open world, so there are a lot of different districts inside Philadelphia. As you play through the story, you can unlock more and more spaces, and each of these districts has its own unique identity. Then, as you unlock them, you can always jump back and forth between them. It’s a big space and, like I said, they all have their own identity.

Xbox Wire: You mentioned the focus on guerrilla tactics earlier. Is it safe to assume that protagonist Ethan Grady is quite skilled in the ways of the guerrilla warrior?

Fashat Shalim: One of the keys in our game is to scavenge the world around you. You look for things that you can use to build your arsenal, and build your guerrilla tool kit, as we call it. Your enemy has far superior tech. They have got the big weapons. You don’t. You have to use whatever is available to you – containers, batteries, improvised explosive devices, anything. You can use an RC car, like you saw in our demo. It’s all based around the idea of guerrilla warfare, and the things that you would possibly use if you were a guerrilla fighter.

Xbox Wire: Will “The Revolution” include any cooperative or competitive multiplayer?

Fashat Shalim: Yes, I can confirm that we have four-player co-op. We kind of hinted at some co-op in our demo. When you are attacking the KPA police station, at that point, you come across a couple of buddies who are already there; one of them actually sets off a distraction explosive, which kind of pulls the KPA away from that compound and lets you actually go in and do your thing. That’s just one example of how co-op can work.

Xbox Wire: Very cool! And how about competitive multiplayer?

Fashat Shalim: Oh, I’m not talking about anything more in multiplayer. That was pretty much as far as I can go on the multiplayer front, without getting killed!