The Lilttle Acre has Made Its Way to the Xbox One

Developer Pewter Games, executive producer Charles Cecil and independent games publisher Curve Digital have finally been able to release The Little Acre on Xbox One. A launch window discount offer is currently live on the Xbox One store – enabling players to grab the game below its usual SRP of $12.99. Xbox One owners able to download a free Digital Artbook for free via digital magazine website ISSUU.com.

You can check out a brief trailer below, even though it has the wrong release date:

Created by the Dublin-based Pewter Games alongside Broken Sword creator Charles Cecil as executive producer, The Little Acre is a heart-warming, story-led adventure featuring hand-drawn animation, full voice acting, and a beautiful original score. Inspired by the marvels of classic Don Bluth animation (All Dogs Go to Heaven) and the magical wonder of a Miyazaki world, the game is set in 1950s Ireland and follows the story of Aidan and his young daughter, Lily. Investigating the sudden disappearance of his father, Aidan finds himself transported to a strange new land populated by bizarre creatures. Things are made slightly more difficult when young Lily decides that she is going to “help” and encounters her own perils along the way.

Our review of the game should be live soon. 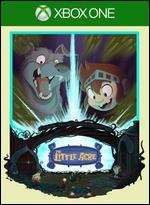