Jackbox Games has released The Jackbox Party Pack 4, a totally new collection of five and a half side-splitting party games, and although available on some other platforms, it will be available today October 20th on the Xbox One through the Xbox Games Store.

The Jackbox Party Pack 4 makes any get-together a blast with five and a half patently absurd games:

Games in The Jackbox Party Pack series support phones, tablets and computers as controllers; simply enter the room code at Jackbox.tv using your device to play.

What’s more, up to 10,000 additional audience members can join the fun to affect the outcome of specific games. Other optional features like extended timers and manual censoring make it easy for streamers to play with their communities, as well as a family-friendly option for more wholesome gatherings. 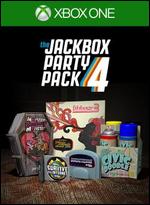