CALABASAS HILLS, Calif - Feb. 19, 2002--THQ Inc. today announced it has shipped "New Legends(TM)," its combat-based, action-adventure game, exclusively for the Xbox(TM) video game system from Microsoft. In "New Legends," blades and bullets clash as players choose from a variety of defensive, ranged and melee weapons as they battle to free the Soo kingdom from the evil Xao Gon.

"As an exclusive Xbox title, ’New Legends’ delivers a fresh and unique action experience," said Alison Locke, executive vice president, North American Publishing, THQ. ’New Legends’ will be a welcome addition to the software library of the more than 1 million new Xbox owners." "New Legends" has been receiving high praise from both the video game community and the mainstream press:

" ... `New Legends,’ a pseudohistorical adventure that serves up a heaping helping of kung-pow." -- Maxim

"The detail to the characters is excellent and the animations, especially the fighting techniques, are spectacular." -- IGN "... this game is yet another reason to consider buying an Xbox." -- GameSpot

Developed by Infinite Machine Inc., "New Legends" transports Xbox owners to a futuristic China gripped in war. Technology and mysticism have blended to create a rich and dangerous world divided into the feudal lands of the ancient past as humans, demons and gods roam the territories. As Sun Soo, the game’s lead character, players will battle to free their homeland using a variety of weapons and fighting skills.

In "New Legends," the action is intense and the adventure is engaging, as the game focuses on cinematic combat coupled with a gripping storyline. Players will approach battle with the style and skill of a master martial artist, with the ability to wield two weapons at once while performing dramatic attacks and a selection of specialized moves.
Source: http://www.thq.com/ 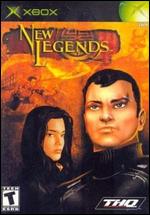 Xbox one no signal
Post by debrartin
0 Replies, 26983 Views