The Jackbox Party Pack 7 Is Out Now

The Jackbox Party Pack 7 Is Out Now!

Jackbox Games is thrilled to release The Jackbox Party Pack 7! You can grab the newest fun-filled collection in the hit party game series for $29.99.

Games in The Jackbox Party Pack series support phones, tablets, and computers as controllers. Just go to Jackbox.tv on your device and enter the room code to play. Up to 10,000 additional audience members can join specific games to affect their final outcome.

The Jackbox Party Pack 7 is rated T (Teen) by the ESRB. The game supports past features and settings, including manual censoring, subtitles, and family-friendly modes to make it easier for families and streamers to host the perfect party this holiday season. New features in The Jackbox Party Pack 7 include a content filtering tool that helps block offensive user-generated content and a new moderation tool that allows for an additional user to join and help review user-generated content before it appears on the game screen. 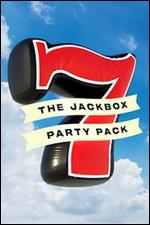 Xbox one no signal
Post by debrartin
0 Replies, 28977 Views