Xbox 360 the only console to stream Netflix

We actually had to brush the fog off of our spectacles to ensure that hazy conditions weren’t clouding our comprehension abilities, but sure enough, that Netflix streaming that Xbox LIVE members have grown to love won’t ever land on Sony’s PlayStation 3 nor on Nintendo’s Wii.

At the very bottom of Microsoft’s long list of details surrounding today’s Xbox LIVE update, we’re clearly told that the Netflix Watch Instantly integration is now an "exclusive partnership," with Microsoft going so far as to say that the "Xbox 360 will be the only game console to offer this movie-watching experience, available to Xbox LIVE Gold members who are also Netflix unlimited plan subscribers." Of course, we’d heard rumors over the years that Netflix could sashay over to other consoles in due time, but it looks like the suits in Redmond had the foresight to lock things down while they still had a chance. So, are you reconsidering that Xbox 360 purchase, or just looking that much more intently in Roku’s direction? Full blurb is after the break. 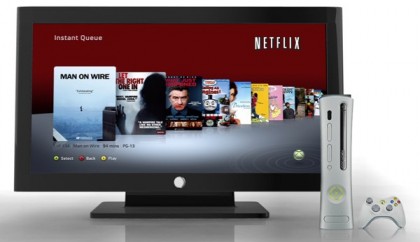 This exclusive partnership offers you the ability to instantly stream movies and TV episodes from Netflix to the television via Xbox 360. Xbox 360 will be the only game console to offer this movie-watching experience, available to Xbox LIVE Gold members who are also Netflix unlimited plan subscribers**, at no additional cost.

From the Netflix Web site, simply add movies and TV episodes to your instant Queue, which will appear automatically on the TV screen via Xbox 360. Once selected, movies will begin playing in as little as 30 seconds. In addition to instantly streaming Netflix movies to the TV, Xbox LIVE Gold members can browse and rate movies, fast-forward, pause and rewind, all using either their Xbox 360 Controller or Universal remote.