In the arcade hey days of the 1980’s, there were many shooters taking up space on the arcade floors devouring quarter after quarter with one simple mission…your 3 initials residing up high of the “Top Scores” list.

In 1987 a side scrolling space shooter made its way to the dimly lit arcade halls, R-Type.  R-Type, produced by Irem, is considered to be one of the era’s classic side scroll shooters and also carried the dubious reputation of being one of the most challenging games in the arcade scene.  Here we are 20 plus years later, games have come a long way as well as gamers. Surely this “Blast from the past” has lost a bit of its challenge and now really only helps bring that nostalgic feeling to our gaming hearts…NOT!

Now all of my fellow gamers can share that experience, available on the 360’s Xbox LIVE Arcade is R-Type, in all of its original side scrolling splendor, which I reluctantly admit includes the original frustration…its still hard. 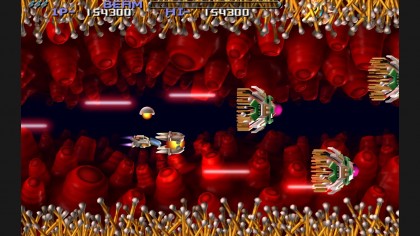 In R-Type you man a space craft, the “Arrowhead”, armed with some decent fire power you man your way through wave after wave of alien obstructions known as the “Bydo”.  Like most of the classics, you manage your way through the game with various power ups that increase your firepower as well as your “Armor” depending on how you decide to use them.

R-Type is very well designed and the graphics were among the most eye-catching of its time. The trick to this game was, as in many of these classic side scrolling wonders; not to rely on the fire power alone, you couldn’t muscle your way through levels, but more so finding the “Sweet Spot”, that one illusive position on the screen that your enemy seamed to overlook, giving you the green light to fire at will on your target without fear.  This was a good thing in R-Type because evasion tactics were priority one as you maneuvered through the seemingly endless cluttered screen of aliens. Many an expletive was shouted at this inanimate machine that took all my hard earned money in the summer of 1987, leaving me broke, aggravated and always coming back for more.

Your R-Type download comes with a few added bonuses such as some improved and updated graphics that can be toggled back and forth in-game, and if you get tired of burning through the allotted 3 lives from the original offering; (and I know non of you would even think of doing this) you can go the “Infinite Life” route and just keep plugging away. 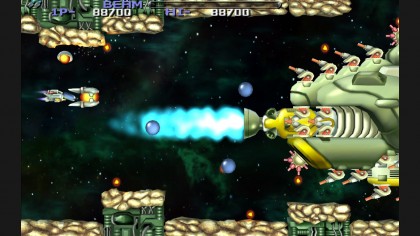 Lastly your R-Type download also includes R-Type II, the sequel to the original arcade classic.  I know these classics don’t appeal to everyone, you either just appreciate them due to the lore and reputation that they have built over time, or you lived through them like I did, either way I feel “Modern” gamers should give them a try, especially a title such as this. Its still challenging and very hard to put down once you start playing, which just emphasizes that good games don’t get old….they just find new players to aggravate.

So jump in your Arrowhead and go kick some alien Bydo butt in R-Type, its still loads of fun and offers just as much challenge, if not more, than some modern games.