Who among us has never wasted 'productive' hours dreaming of discarding our stressful 'careers' to live out the adventure and excitement that can only be offered by operating our very own restaurant? Can there be a more rewarding life experience than to see the expansion of your life's work in terms of 'two tops' and 'four tops'? Our story begins with office worker Flo dealing with stress by doing what most of us only dream of; running a 2 star restaurant.

The porting of this "time management" style game comes to us courtesy of Hudson Soft. Created by Gamelab studios and published by PlayFirst, Diner Dash first entered the scene in 2004, wowing most casual players with it's ability to bring out the completest in any who attempted to turn the game off after 3 hours play. The series has spawned several sequels and many new variations of play. 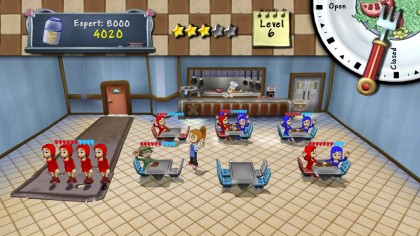 The Xbox 360 Live Arcade version has carried over the frenzied activities and also offers new and exciting rewards; yes, even online multiplayer. Those new to the series will find there is a lot to see and do; from dealing with unruly customers to catering to some unique clientele such as the restaurant critic.

The Career and Endless play options have come through very well with the addition of achievement points for successful completion. The career and endless play have been the staple of the Dash series but the producers have included a very stimulating multiplayer online addition to the game. Online there are co-op and competitive modes for going one on one with friends and team battle mode for up to 8 players which ran very well with only the rare lag in play. 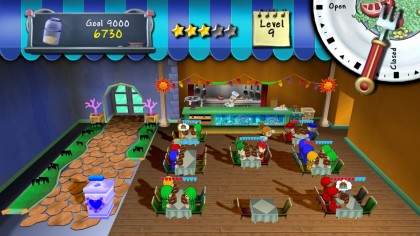 I will say this, both of my daughters have enjoyed the challenges in learning to control the on screen character but they have also become frustrated to the point that they have returned to playing the PC version rather than continue the Xbox offering (which frees up the console for me, hehe).

The visuals are better than expected. The layout has moved beyond to become more immersive but it can be easy to miss some of the more subtle details because of the amount to take in. There are minor issues (see: table dodging) but these become an issue as the game progresses.

The biggest disappointment in the game is the sound. The sound has the usual fare but certainly adding more variety could have been an option. Much of the gameplay consists of the digital dings and pings (outside of the occasional 'hrumph' and a few others) but the opportunity to offer more and even a few real voices was overlooked in this offering. 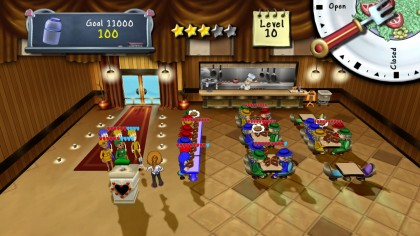 The sound is a sour point for me but it doesn't take away much from the enjoyment and playability. The controls are tricky and are not at all designed for kids, but as you adapt to the controller scheme you quickly see your overall control increase.

Overall this is a typical XBLA porting of a great game; easily identifiable, playable and most of all enjoyable. At 800 Microsoft points this is can be a great game to crowd (62mb) some of your hard drive space but I encourage you to try the demo first; if you enjoy the demo at all then you'll love the game. Score 8.0/10