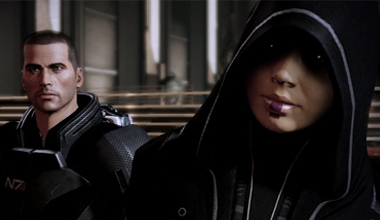 Looks like it's time to finally spend some real money on some DLC now that we've been spoiled with an onslaught of free DLC through the Cerberus Network. Mass Effect's first paid DLC is finally here and is essentially a new crew member to recruit, gain the loyalty of, and then have to use in your ongoing missions.

Kasumi Goto is one of the galaxies master thieves and Cerberus has contacted her on your behalf to help Sheppard's quest. Just like any other member of the Normandy, you will meet, she will tell you her background and then ask for your help with a task before you can gain her trust and loyalty; so nothing is really new on this front.

So to get Kasumi's help you need to return the favor by helping her infiltrate a notorious master criminal's home vault. Donovan Hock is the target and you will have to find a way around his vault's security; DNA matching, voice matching and more isn't going to make it an easy job either. You'll be exploring his home during a party and need to do so while keeping your cover.

Kasumi's mission essentially has two halves; the first being the party where you need to break into his vault to recover back something Kasumi wants and the second part being the escape from the planet and out of there. While the party section is a welcome change from the regular shooter based missions, it's much too short and not difficult at all.

The second section is like most other missions in Mass Effect 2 where you will have numerous enemies thrown at you and you get to see the new powers that Kasumi possesses. She's an assassin to go along with her thievery and the special skill she has is quite powerful and useful when it is upgraded; though I won't spoil it for you here.

The biggest gripe about the DLC that bothers me is the timing; this is in regards to the release timing ( four months after release of the game itself) and when it's ‘supposed' to take place in the story line. Most likely you've completed the game (probably numerous times) which is why it doesn't make sense that I'm recruiting someone for my mission that is already complete. Also, if you've chosen the path at the end that basically exiles you from Cerberus, this makes even less sense, and there doesn't seem to really be an explanation other than this is supposed to fit in before the game is completed. Sure on a second playthrough it will fit, but what about us that continued the game afterwards instead? If this DLC came out the same time the free Zaeed character quest did, then it would have made more sense as well; release-time wise.

The other problem that I had is that the DLC mission is so short that you never really start to understand or care about Kasumi in the long run. Yea she looks cool and has an awesome battle power, but after she's a member of your crew, you'll never really talk to her again (like how you can't have conversations with Zaeed on the Normandy). She seems like a great character that could flesh out if she was given more time other than a single mission to be played in.

I do appreciate what Bioware is trying to do by giving us a new character (no matter how under-developed she may be) but it really confuses me why I would need more crew mates for the huge mission I've already completed. Sure you get a new squad member to use in other missions, a new weapon and a new achievement, but it's the story that I loved playing Mass Effect 2 for, and this just seems like a glaring plot hole that someone forgot to fix.

Even though Kasumi's mission will be completed in about an hour or less, at 560 Microsoft Points, it's not a terrible deal if you've been having a craving to play again; I just suggest that you not get too excited about how she will intertwine with the main story if you've already completed it.

The great boss fight at the end was a slight saving-grace for myself and having an assassin for those tough missions is something I won't ever say no to.