Shadow of the Tomb Raider: Path of the Apocalypse by S.D. Perry (Novel Review) 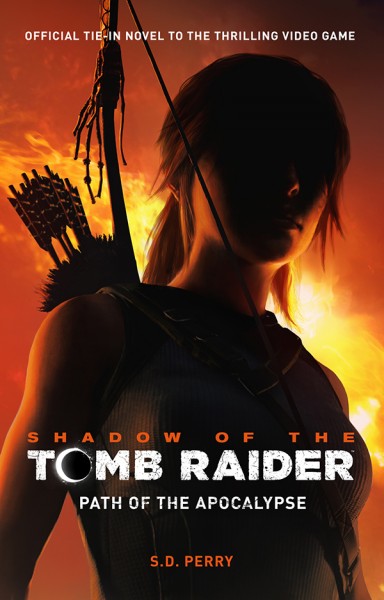 When something big is released, tie-ins are to be expected. After all, companies will go to great lengths to make extra money off of their big licenses, beyond just releasing a movie or a video game, or staging an event. This is why, as gamers, we dealt with a lengthy period wherein almost every big movie and TV show that could received a tie-in video game, with most being rushed, flawed and mediocre at best.

It may not get a ton of publicity anymore, but the reality is that there’s a market for literature based on popular licenses, be it movies or video games, or what have you. Titan Books is one of the more prominent players in this industry, and have been responsible for bringing a large amount of licensed novels to market. Hell, I’ve already reviewed a couple of them this year.

The latest in Titan Books’ catalogue is a Shadow of the Tomb Raider tie-in called Path of the Apocalypse, which was commissioned to and written by author S.D. Perry. It is, in fact, the game’s “official tie-in novel,” which is something that is prominently posted on its rather nice-looking cover.

Going into this book, I wasn’t sure of what to expect. When I’d first heard of it, I’d thought it’d be some sort of side adventure. Then, when I started reading the thing, it seemed as if it was going to retell the game’s storyline. I say that because, after a short opening featuring a new character, it jumps to Mexico where Lara prominently kickstarted the Mayan apocalypse at the beginning of her latest interactive adventure. At that point, I sat back and expected to read the story of a game I recently reviewed.

Mild surprise followed when, after the flood overtook the Mexican village, the book stayed there longer than the game ever did and told a different part of the story. One in which Lara and Jonah helped the victims of the waves until our heroine could barely stand and needed to be taken back to her hotel room to rest. This added some depth to the game’s storyline, but still left me unsure of where it was going to go, exactly.

It’s upon waking up in her hotel room where Lara’s story changes and expands within Path of the Apocalypse. I say that because, instead of flying straight to Peru like in the game, she meets with a Trinity geologist (the same man who appears in the opening chapter) and is given the coordinates of a Trinity dig site in Colombia, wherein Mayan paintings, relics and puzzles are said to offer more information pertaining to the apocalypse and what will happen if Trinity’s plan comes to fruition. All the while, though, Lara Is followed by a group of Trinity’s best special ops soldiers, all of whom wish to learn about her plans and put an end to them.

In the game, Lara and Jonah don’t go to Colombia, and have their pilot take them straight to Peru. This addition to the story is mostly set in-between the time they set off in Mexico and when they got to Peru under adverse conditions. After receiving the information and its related tips, Lara asks the pilot to make a detour to Colombia before they go to the Peruvian jungle.

What exactly is awaiting our heroes in Colombia? Well, to put it simply it’s a system of tunnels and caverns that sit underground and feed into a large hole that is accessible from ground level. A massive, labyrinthine set of tunnels that, to be honest, I could never map or even come close to drawing after reading Shadow of the Tomb Raider – Path of the Apocalypse. To say that the location is a confusing mess would be an understatement.

Simply put, this is a story of one powerful and resourceful treasure-hunting woman being hunted by several trained and absolutely ruthless mercenaries. After Lara and Jonah fly to Colombia, Trinity does the same after learning of their whereabouts. Harper, an evil son of a bitch who wants nothing more than to kill Lara for both Godly and personal means, then leads his team into the tunnels and has each member hunt and stalk Lara as she makes her way through one crevice to another, within the darkest darkness that you could ever imagine.

While all of this sounds like it could be a mission within the game, or one like it, Path of the Apocalypse’s narrative simply doesn’t work very well within the written words. Sure, it maybe would’ve made for a decent downloadable prequel to the main campaign, wherein Lara must traverse caves, find clues and solve puzzles, all while being hunted, but it doesn’t make for a very good book. The reason for this is that the setting is not only boring, but also poorly described within the narrative. In fact, it almost felt as if the author got lost, herself, and just started making up more and more cracks, holes and rooms as she went on. That may not be the case, but I sometimes wondered it all the same.

What I gathered from the descriptors was that there were at least three levels to the caverns, and the bottom part was a maze of random rooms, caverns and tunnels, all of which were created and modified by floods, soil erosion and perhaps even explosives. After all, Trinity mapped some of it before Lara got there, and left some explosive traps before they departed. Lara spends time on all levels, but the way that the author describers her journey got to be very confusing after a while, and I had a hard time keeping track of the layout and which rooms she’d entered and left.

It doesn’t help that this book is told from multiple perspectives, and does this without any real chapter breaks. Instead of such pauses, the author decided to use a few line breaks or three horizontal stars to introduce and separate each character change. It’s not the way I would’ve gone with things, and was odd to read.

As mentioned, this is told from multiple perspectives. It begins with Luis Marin, the Trinity Geologist who was working on his report as the tsunami hit his home village. It then shifts to Lara, then to Jonah, and then back to Lara. Then, after they leave for Colombia, Harper (the leader of the Trinity spec ops group) is introduced, and things are told from his perspective for a time. This paves the way for the group’s flight to Colombia, hot on Lara’s footsteps, where they enter the cave system and then each get their own ‘chapters.’

Needless to say, it’s a bit much. The perspectives change a lot, and it’s an overload. It would’ve helped if the bad guys had personality, but other than one being afraid of the monsters (strange white salamanders who bite) who live inside of the caves, and another being a female knife expert who loves to battle and kill her enemies, there’s almost nothing to that extent. Add this to the confusing setting and the game of hide and seek that it forces, and you have a pretty boring story.

These complaints would be less intense if there was a good reason for this side quest, but there isn’t. Lara learns things, but actually says that it was practically worthless near the end of the book, which I found kind of funny and fitting. This book tends to feel the same way, and truly does fit the term tie-in. Hell, it’s more of a cash grab than anything. It’s a way to entice Tomb Raider fans, as well as newcomers who liked Shadow of the Tomb Raider, to spend more money on the license.

I feel bad for saying some of these things, because I know that S.D. Perry put a good amount of work into this thing. After all, writing a book isn’t easy. It’s also very possible that she didn’t have much of a choice with where the story took place, and within which confines it did. It’s not as if she did a horrible job and released an absolute trainwreck of a terrible book. It’s just that the final product feels pointless, and is isn’t good or entertaining. For a tie-in, it also doesn’t add a lot to the narrative. The only real substance here relates to Lara’s occasional battle with her conscience, which is after her for kickstarting the Mayan apocalypse, as well as killing other human beings. She really doesn’t have much of a choice here, though, given that these ‘elite’ and very forgettable mercenaries are hunting her with murder on their minds and drool coming out of their mouths because of it.

In Path of the Apocalypse, S.D. Perry’s writing was better than the material she had to work with, even if it was never great. There were some strong sentences, and nothing ever made me think that she’s a bad or untalented writer. That said, nothing stood out as being great, and – as I said before – it felt as if the setting got away from her. After a while, I lost track of the tunnel system’s structure and stopped caring as much. It was just one tunnel, then one room, then one crack after another, and there were too many players on multiple different levels.

Maybe, if the writer had been given an opportunity to craft her own, standalone Lara Croft adventure, it would’ve turned out a lot better than this. A bland and predictable game of cat and mouse, set within ever expanding pitch black caverns just doesn’t work that well as a novel. It’s confusing, and it’s boring. Actually, tedious might be the better word to use.

I guess it kind of goes without saying, but there’s no way that I can recommend Shadow of the Tomb Raider – Path of the Apocalypse by S.D. Perry. It’s simply not a good, worthwhile or meaningful book, nor does it add much to the character or the game. I read it over the course of about four days, but that wasn’t because I loved it and couldn’t get enough of it. I simply wanted to get to the end as fast as I could, so that I could move on to something interesting.