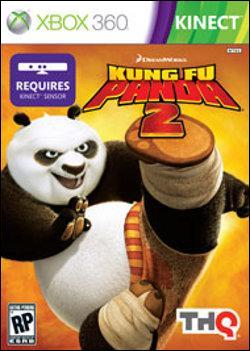 Ladies and Gentlemen, I present to you Kung Fu Panda 2 for the Xbox 360!

It may interest many a reader to know that my nick name is 'the K F Panda'. And while you may be envisioning a mighty warrior with rapier wit, I've been told its because I'm short, stout and I often have black eyes.

As an aside to conventional practice, Dreamworks Animation has decided to cash in on a popular character and create a sequel to the 2008 hit Kung Fu Panda. Of course to recognize the originality of this new offering the movies creator has decided to name it 'Kung Fu Panda 2' (you see the 2 ensures a clear delineation of content). And as a near unprecedented move, the likes of which we've only ever seen in such films as 'every other animated blockbuster movie', there is a video game developer eager to release a movie tie-in title.

Lucky for us, THQ is at the helm of the video game release and Xboxaddict is here with a hands on preview. The film and the game are scheduled for a May 24 release date and while we don't have all the information regarding the movie release, the video game is stated to feature an original story that picks up where the movie left off.

Of course THQ is not really ones to rest on their laurels and offer a new game on old experiences; to ensure an original experience Kung Fu Panda 2: the video game seeks to 'capitalize on the strengths' of the Xbox 360. That's right folks, this is a Kinect title! Now before the naysayers can chime in, let me say that the studio seems to have gotten the controls down pat. You are taught, in stages, to master the art of Kung Fu as you seemingly take control of Po to take down a myriad of evil henchmen. From kicks, to punches, to over the top finishing moves, to actually calling in 'the Furious Five' for support, the game makes full use of the Kinect peripheral (even the menu system requires full interaction).

There is a full story mode (featuring some great boss battles) along with numerous minigames that become available as the player progresses. This is a game that will certainly tire out young and old alike while providing seemingly, endless hours of laughter (as my loving family watches me flail about).

My kids had a great time beating up gorillas, wolves and Komodo dragons but it was the minigames that seemed to hold their attention. It's clear that this title is focused on a more youthful demographic, but I certainly looked forward to the times my daughters would need my years of experience and precision (and patience) to get them through an occasional tough spot.

I am being very careful not to give away too much information in this preview but I'll say this 'its nice to have a new reason to activate the Kinect peripheral' and to be genuinely entertained, is a welcome addition to a movie tie-in title.

The preview copy I have, does have some issues and I'm hopeful that these issues will be addressed prior to the official release. If these issues are remedied (cough, load times, cough) I have no doubt that Kung Fu Panda can rate among the top Kinect titles released to date.

­Keep an eye out for the upcoming Kung Fu Panda 2: the video game review from Xboxaddict.com.