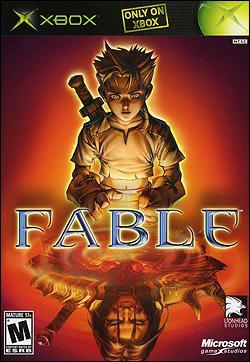 This year at E3, XBox was on the tip of everyone's tongue. Halo 2, Rainbow Six 3, and XSN were some of the hot topics on the floor this time around, and each of them were interesting in their own right. What was even more interesting was what the folks over at Microsoft were keeping behind closed doors. The XBA crew got a chance to sit in with Dene and Simon Carter, the heads of Big Blue Box, the developer of the upcoming RPG Fable as they took us for a wild ride that showed us just why Fable is likely to be this holiday's big seller.


Fable is everything that had been promised from the start. The idea of a game where you choose your own fate has been toyed with before, but Fable may be the first game that actually hits this target dead on. In the game, you
start as a young lad who decides due to some events in his life that he wants to be a hero. Being a hero, however, is not as easy as Superman may make have made it out to be. In Fable you must try and win over the local villagers, and make yourself the hero of the town, as well as compete against the other heroes for fame. Each quest you perform and the way you complete it will alter the world around you, as well as the physical attributes of your character. It is in this way that your character naturally develops by reflecting the decisions
you've made.

The game plays like a standard action/adventure RPG. One button is used for actions, and when combined with the directional pad, will unleash a nice selection of moves while in combat. The magic system works about the same way. Of the few lower level magic moves we were shown were a "Hulk" like move where
your character gets powered up and glows red, a move similar to the Star Wars "force push," and a cool move to regain health where you steal the enemy's soul. Each of these magic attacks can be upgraded so that they have more power when used in play. In order to do quests to attempt to upgrade your Hero status, you must go to the Hero guild and accept a challenge that the townsfolk have submitted. When accept a quest, you can boast to the locals about your skills and how you will complete the task at hand. This works like a betting system, where if you successfully complete the task with the stipulations you've added, you'll gain much more fame and support from the villagers. Your path to become a hero can either be clean cut by being everyone's friend, or you can just be the
most evil bastard in the land and beat up your supporters and enemies alike. Either way, some of the townsfolk will be behind you, because there are people that like the badass more than the clean cut guy.


As mentioned above, however, the decisions you make will change your appearance. If you rely solely on magic, you will become pale and loose your hair. If you constantly use your sword, you will become tall and ripped. If you overeat, your gut will grow larger. If you become really evil, your veins will show
through your skin, and you will naturally attract flies. In this way you will have to be conscious about every decision you make, not only worrying about the amount of money you have to spend, but the effect the decision will have on your physical appearance and your hero status. No one likes a stinky hero.

The graphics are looking nice and crisp. The scenery is very nice and sets a good atmosphere throughout the game. A good use of textures that flow with the general look of the game help to bring across the standard medieval feel. Fable takes advantage of the XBox's built in graphical techniques to pull off some
great graphics. The character animations are spot on, with each character moving and interacting fluidly. The animation for the magic moves we were shown had nice effects and came across nicely. We were shown a nice cycle of character looks that are possible, with everything from your clothing, hair, and tattoos
are customizable. The dynamic way your skin will change depending not only on your health but by how good/evil you are is also a nice touch, as all of your changes are represented graphically on your character.


The exact depth of Fable RPG is like none I've ever had the pleasure to experience. Your choices are near infinite. You can pick up abilities from other people in the town, as well as influence them right back. You can buy items, houses, get married, or murder your annoying spouse if she gets too annoying (Remember, it's just a game). The fact that your character constantly changes due to the choices you make gives Fable a seemingly infinite replay value. This fact alone should pull gamers into the amazing world that is Fable, but not in the traditional sense. Sadly, Big Blue Box does not plan to feature XBox Live support, due to time restraints, but the game will feature the ability to use your friends save game to add some cool new features to the game. By utilizing your friends save game, you can either plug them into your game as a rival (Who you may tend to meet from time to time) or you can use
your friends character as a "Ghost," which at any point in the game you can swap out for your current character. It is assumed that by using Action Replay with this feature, you can send your character to a friend across the net, which should make this feature very popular.


In the end, I must say that Fable is going to be one of those titles that will automatically make your jaw drop. I applaud the folks over at Big Blue Box and I hope that they get everything into the game that they want in time for the 2003 holiday release. I don't feel at all awkward in saying that Fable will be the best XBox game this holiday season. Nothing else stands a chance.