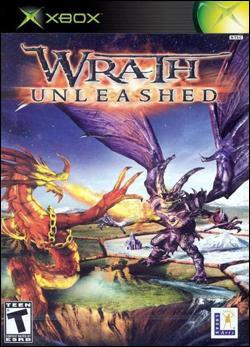 January 24, 2004
I like to consider myself a pretty level-headed guy. Usually when I approach something I can stay unbiased towards it and deliver my honest opinion. Of course, there are still a few things in life that I am a sucker for: Redheads, bacon and any game that happens to remind me of an old game I really liked. On that note I was very interested in getting my hands on LucasArts' new game, Wrath Unleashed. Not only is it a delve into a new genre for the Xbox, reading about it made me think back to one of my favorite games for the very old (almost archaic) Commodore64.


The game it reminded me of was called Archon Adept. Now judging from the demographics I normally see on the site I am doubting a whole lot of you have ever seen this game, much less played it before. For those of you who don't know about it Archon and its sequel Archon adept were a fairly perversed form of chess with a fantasy theme. The boards were abstract, each units had their own types of spells and movement restrictions... all in all it ended up being one of the premier strategy games on the C64 and other consoles.


After a quick flip through the manual for Wrath Unleashed I noticed it had a lot in common with Archon Adept. There were references to abstract gaming boards, different types of units which possessed different powers, and that each of these units has different movements attributes. Not only this but the theme is a fantasy one including spell casters, dragons and gryphons! Now if that doesn't sound like Archon Adept, then I don't know what does.


The concept behind Wrath Unleashed is simple enough. There are four demi-gods all wanting to become the supreme ruler. Because of this they will battle it out on playing fields, much like people would do on a chess board. There is one major difference though: this is a really cool chess board. The board is less akin to chess and looks more like a Stratego setup with octagonal tiles laid in succession. The cool thing about the board is each tile is a different kind of zone. You have frozen ice tiles, magma coated fire tiles, earth tiles and aqueous water tiles. Now this is more than just a pretty setup, the different types of tiles factor into the gameplay. Each god is aligned with a certain element and has a natural advantage over the other gods there. For instance, if you play a water god you tend to kick a little more ass if you are fighting on water tiles. This leads to a deeper aspect in the strategy as you try to force the board play onto as many of your tiles as possible.


Now, just because the tile gives you the advantage doesn't mean you will necessarily win every battle. You also have to take into account the creatures. Each god commands an army of various mythological beasts that have varying amounts of energy and superpowers. In this respect a water unicorn will do pretty well on a water tile, but probably not good enough to kill the fire-aligned dragon of doom. So now on top of the positional strategy we also have to pay attention to how well our armies will match up with possible attackers from the other armies.


As if that wasn't enough strategy to begin with even more is thrown at you. Your god has uber-god powers allowing you to do some pretty cool things like resurrect dead armies, smite the opponents pieces and even change the type of land tile in a certain location (i.e. turning a water into a fire tile). Of course you cannot cast this stuff as often as you want, you will have to secure mana sources on the board in the forms of temples and mana vats. Every turn you end with these in your control adds to your spell casting mana pool, so controling as many as possible will be very adventageous.


By this point you'd think there is enough to keep you occupied for quite some time but LucasArts added even more. There are other special tiles such as Portals and Monuments. By controlling portals across the boards you can teleport units much farther than they would be able to move normally. This means that by sneaking one piece across the board and grabbing a portal you can instantly pour your army into the heart of enemy territory and do some serious damage. Monuments (at least in the single player game) usually host some tough creature who you must kill to accomplish a goal. By accomplishing this goal something cool usually happens like tiles appearing to link new parts of the board together.


So now that we have some knowledge as to how the game is played it will boil down as to how smoothly it plays. Well first of all as a board game this is a great looking title. Board games are a genre in short supply on not only the Xbox, but all other console systems as well. Wrath Unleashed provides a really in depth game style that will have you contemplating moves for quite some time before you actually decide to make them, and in that respect the games can become quite engrossing as you lose your sense of time and become totally involved in it (one really good sign it is a great game). As far as the strategy aspect goes it seems to be very well balanced. After hours of playing against the computer and friends as each of the different gods it quickly became apparent that while each army was different from the others that no one had an inate advantage over the opposition.


Graphics and sound were about average for a cross-console game such as this and didn't do anything to detract from the main focus of this game: the game itself. Everything seemed to run at a smooth 30-60 fps with no stuttering of framerate regardless of what was going on. My only minor quibble with the graphics is the style in which they are done. I'm not sure, but somehow 'fantasy' seemed to have gotten bunched together with 'bright colors' and the end product are cool looking creatures who looked like they were skinned by Lisa Frank. Again, not detrimental to the gameplay, but I think this game would have fared better had it looked a bit more evil. I would go over the sound, but 'sound' and 'board game' never go together really well. Lets just say that the sound effects were appropriate, not distracting and didn't get nearly as irritating as I would have expected them to in a game like this.


There was only one serious flaw that I found in the entire game and that was within the actual combat system. The combat system on a whole looks like a good implementation. Whenever you land one of your pieces on another piece you battle them in real time a la Soul Caliber (except minus the real people... and cool weapons...) The combat system is layed out and seems fairly functional yet easy to grasp. There is a weak attack, strong attack, weak spell and strong spell. Also you have your standard moving and block buttons. Here is where the system becomes flawed: the recovery time after getting hit is too great. What happens is you hit someone with a weak attack and before they can recover you hit it with them again. Once you realize this exploit it becomes easy to one button mash your way through most of the game (until enemies don't let you get close enough for one button attacks). As this is a preview build of the game I hope they do notice this and do something to correct it before release.


The last complaint I have is kind of a weird one that I found to be funny in the end. When you watch the introduction video you will be amazed at how little clothing the women are wearing. Keep in mind, I am not talking about g-string, I am talking outfits that make the Dead or Alive Volleyball girls look totally modest. Of course this isn't my complaint as it just made the game all the more fun to watch. My complaint is after you beat a campaign with a certain god you are rewarded by watching another video in which they are wearing MORE clothes! Is this not backwards? What happened to the days where beating a game meant you got to see Samus Aran without her suit on? Where is the motivation to complete more campaigns after you realize clothes magically appear on the characters?


All in all this is a solid title being released by LucasArts and is a welcome addition to the Xbox library. Anyone who is into console strategy games should be very inclined to check this game out. LucasArts has set the bar for a new genre in the Xbox collection and with any luck this will be the start of another line of great games for us board game lovers out there!