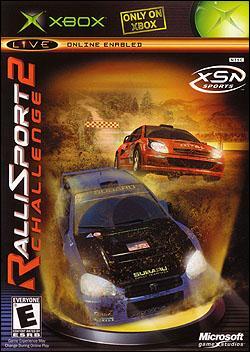 January 29, 2004
There are some perks to working for the best Xbox fan site on the internet. Reviewing things like the Teletubby and Barbie’ Incredible Noise Making Machine so you poor guys don’t have to go out and drop your $50 on it is definitely not one of those perks. Getting your hands on maybe the most anticipated driving game for the Xbox this year is definitely a big perk. Tighten your seat belt and get ready to power slide like a madman, Rallisport Challenge 2 is here.


Now let me get one thing straight right off the bat. I am not a rally driving expert by any stretch of the imagination. I don’t know what drivers drive what type of car, or even if these rally cars can really crank themselves into a four wheel power slide on dry pavement. So I am not the person to judge if this game accurately represents actual rally tours. I have attempted to do some real world testing with driving my Jeep like a rally car to the screams of terror from my wife. So having some extra time to play Xbox with my driving privileges revoked, I have been spending lots of time playing Rallisport Challenge 2. I consider myself a casual racing game fan. And let me tell the causal racing fan, this game is a blast.


There are a number of different types of races to take part in. Rally: The usual timed races through both on road and off road sections where you are racing against the times of the other competitors. Rally Cross: No more racing against the clock here. Wheel to wheel racing against three other cars. Ice Racing: More wheel to wheel action along icy tracks. Hill Climb: Same idea as the usual rally races, but straight up the side of a mountain. Crossover: A tight twisty turny track where you and your opponent race on your own track, but then switch lanes after each lap.


One thing that really helps bring you into a game is the environment that surrounds the area that you are playing in. The backgrounds in this game are breathtaking. I kept wanting to jump out of my car, grab my sniper rifle and hunker down for a nice WWII capture the flag first person shooter. I know this sounds silly, but the trees in this game are some of the best that I have seen in any type of game anywhere. One of the tracks have you heading down a tiny back road with trees overhanging from both sides, all in fantastically captured fall colors. The trees are swaying with the wind, and fallen leaves blow across the road. The water is also very well rendered. I did my best to get my car to swim with the fishes, but unfortunately the “save Chewy from himself” function seemed to kick in and plop me back on the road. If you thought the graphics on Project Gotham Racing was a great looking game (like I did), you are going to be blown away when you sit down in front of this game for the first time.


So, of course, you will be playing all alone on all of these tracks? Not quite. You will have the usual split screen with up to two players. Then comes the big one. You will be able to connect 16 Xboxes together and have all 16 playing on the same track. Yes 16!!!! This will soon be the frat house racing game to work away those hours that you really should be studying. The only drawback to playing with the massive number of players is that if there are more than 4 on the track the cars will not collide with each other. Still, even though you can’t smash your buddy when he slows up for the corner, running right through his ghost to pass him, just as he is about to cross the finish line will be very satisfying. Rallisport Challenge is also going to be supported by Xbox Live. So for all those Live addicted Xboxers there is a new game to contend for your precious Live hours.


Speed. It is a difficult sensation to convey to someone slouched on their couch with a bowl of cheese popcorn balanced on their beer gut. This game is FAST. From the start of the very first track, all the way along this game makes you feel that your car really is screaming along the track at 130mph. Something like Project Gotham 2 you are not going to just smash the throttle to the floor and steer around the tracks. If you don’t let off you will be witnessing first hand the new car damage system. It seems that I prefer to drive my car with both doors removed, and all of the windows smashed out. I guess it gives me that “wind in the hair” feeling as I storm along the track. The rails don’t just slow you slightly like in other games. If you hit them fast enough your car is going to launch into the air spinning madly as all manner of car parts fly off in all directions. All I know is I was glad that that there wasn’t a repair bill that I had to deal with at the end of each track.


There are a decent number of car tweaking settings available on each track. From suspension settings to weight balances there is just enough here to keep the gear head interested. And for computer nerds like me, you can just ignore all of the car tuning and just race baby! Maybe this is something that you have to do when you work your way up to the Pro and Champion level. These higher levels were very tough. I had a tough time coming in more that halfway through the pack. I am sure like any other game, with a bit of time invested, you will be able to get better and better.


If you are a fan of unlockables this is a good game for you. Lots of cars, tracks and even different paint jobs available for cars are hidden within Rallisport Challenge 2. And instead of only one way to unlock a feature, there are a number of different ways to unlock each bit.


It seems that Microsoft has a very worthy successor to their first Rallisport Challenge game. There were still some issues with this preview build, loading times and menu graphics, but with a bit of cleaning this is going to be a great game. If you are a rally racing fan, you are already waiting for this game, but this game is also going to appeal to the masses. Now if I can just find out where my wife has hidden the keys to our Jeep I will head out and pre-order this one.