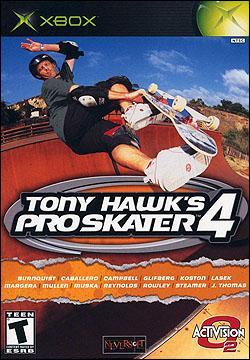 Welcome to the world of Neversoft?s Tony Hawk 4. Ok, I know you?ve all said it, ?Extreme sports games are played out.? Well, Tony Hawk 4 will change your opinion entirely. The 4th installment has rid itself of the off the wall physics and outlandish trick scores that plagued Tony Hawk 3. No longer can I score a 700,000 point combo in the first 20 seconds of gameplay. Though that doesn?t help for bragging rights, it does add difficulty and realism to this installment. This, among many other improvements, bridges the gap to the latest Tony Hawk game and makes the game worth owning.

The basis of Tony Hawk 4 is, of course, the Tony Hawk?s Pro Skater engine, the same one used since the beginning; however, there have been a few changes since then. The big revision to the engine in Tony Hawk 2 was the manual, 3 was the revert, and now 4 is the spine transfer. This allows you to go up a spine (a set of ramps back to back) and transfer from one side to the other. This comes in handy in many situations and allows for a lot of gaps that were otherwise inaccessible. Another addition is that of skitching, which allows you to hold on to the back of cars and ride behind them for extra speed. The engine is as solid as it was in the beginning and it seems to just get better with every installment. The major gameplay improvement of Tony Hawk 4 is the free roam career mode. Taking a hint from Acclaim?s Aggressive Inline, Tony Hawk 4 has done away with timed runs and taken up a much freer playing environment. You skate around and then find a NPC with an indicator above his head. You then press B to speak and they give you a goal. These can be standard goals similar to those in the previous Tony Hawk?s (high score, S-K-A-T-E, big combos) or those completely new to Tony Hawk 4 (such as breaking the barriers off rails, freeing a painter from a shark, or the new C-O-M-B-O mode in which you must collect the letters to the word combo all in one combo). With every challenge that you complete you earn cash. At any point after you exit a level you can choose to spend your cash on movies, levels, secret characters, cheats, etc. Also, when you earn a stat point, the stat point goes to every skater, not just one. This means that you only have to beat all the 190 challenges once, not once for every character, to complete the game. The Create a Skater and Park Editor seem to improve slightly with every installment, but no vast improvements thus far. The Create a Skater now allows you to scale body parts individually, allowing a much more realistic (or much more ridiculous) character. There is also the option to purchase extra equipment for your custom skater (clown pants, eraser hair, things along those lines). In addition to all of this, Tony Hawk 4 now has a variety of mini games, from Tennis to Poo Dodge (a mini game in which you avoid feces flung by monkeys), to keep you entertained. Not all of these mini games are of the highest quality, but they are fun distractions to kill time. All in all, the gameplay is very solid and makes for a very enjoyable experience.

As a whole the visuals on Tony Hawk are great. The character models are better than ever and the environments are picture perfect. The texture of the environment are great, a good example is to look at the animals in the Zoo level, very well done. The character animations are all very fluid and smooth and the physics have been scaled down a little, making it more realistic than it was in Tony Hawk 3 and that makes the character animations even better looking. No longer do you just bleed, after falling down several times you receive bloody elbows, knees, and other battle scars. There is however one thing that bothers me, this issue is the look of the NPC models. From a distance the NPC models look quite good actually. When you accept a challenge, however, it zooms in on these models and they look horrible. They appear as though they were plucked directly out of an N64 game and placed into Tony Hawk 4, very blocky and a ton of jaggies. Even the character models used on the skateboarders themselves seem much worse than those used when you are controlling the character. But, outside of that the graphics look exceptionally good and provide a very realistic looking game.


Sound is a difficult category to rate on a genre such as extreme sports. The reason for this mostly is the fact that a lot of the sound that goes on in these games is music and judging music is all an issue of personal preference. However, Tony Hawk 4 does have a wide array of eclectic music and the custom soundtrack capability, so you are no longer limited to the default soundtrack. This means you can all now nail your perfect run with your favorite music playing in the background, video gaming bliss. The sound effects are all very well done. The NPC speech is all voice acted, which is a little touch that I enjoyed. Tony Hawk 4 is a much more believable world compared to the other games in the series so you can now skate by a crowded street and hear a number of conversations going on. This all adds to the realism of the game and its surrounding environment.

Well, I can?t say I have a whole lot to suggest. Working on the NPC models would be great and new features are always nice. Something I?ve always wanted was the ability to drop in rather than falling from the top of the ramp to the bottom. But all those issues are minor and I just hope to see another game in this fantastic series.