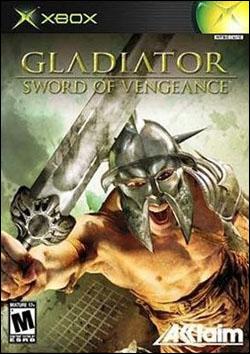 Ever feel like avenging the death of your leader using swords and battle axes? If the answer is yes, than Gladiator is just the game for you.

Set in ancient Rome, your character has been chosen by the gods to fight anyone who gets in your way to win back the throne of the Roman Empire that was stolen from the people.

To put it simply, this game plays a lot like Gauntlet. You go around on a set path, killing anyone who gets in your way. The fighting system isn?t greatest though. At first glance it seems like they have a semi-decent combo system, but in the end it turns into a button masher. The controls consist of two attack buttons (each which do the same thing), two ?lock on target? and a dodge button. What is it missing? A Block Button! All the enemies you face and block your attacks, but your only line of defense is to use the dodge button to roll away or jump back a few steps. Your character also lacks the ability to jump at free will. The only time you are allowed to jump, is at designated points by pressing the ?action button?.


Even then, it?s impossible to miss a jump, thus taking some fun out of the game. As you go along on your journey, you will come across challenges which will unlock special features like new items that can be found, or the most useful, yet most frustrating one: the fight gauge. The more unique strings of attacks you do, the more the fight gauge goes up, as does the power of your attacks. But the developers also decided to put a field of multicolored nonsense rotating around your character when his fight gauge is built up. This is very frustrating, especially in heavy combat, because it makes it VERY hard to see your character and the enemies very close to you.


Overall, the way it plays is lot like a Gauntlet rip-off, except for one major thing: Gladiator is only ONE Player! This game would have been a LOT more fun if they would have added the ability to play with friends. The only other major problem this game has is lack of a difficulty setting. Experts in hack and slash fighting games will find this game very easy.

The graphics in Gladiator are pretty decent. The character models are quiet nice, a problem found in most games nowadays. The landscapes and environments aren?t the best seen on the Xbox, but they?re far from the worst. There is one area where you fight in tall grass which looks real nice from a distance, but at a closer look, the grass looks very pixilated. One aspect of the game that isn?t pretty is the camera.


The only control you have over the camera is zooming in and out, that?s it. One would figure that since there?s no control over the camera, it would stay the same most of the time right? Nope, you?re not that lucky. The camera is always changing; making the game feel like a Hollywood movie, but really affecting your game play.

The sound is the only place where this game actually shines. The game is set in ancient Rome, and they got some great voice actors to fit the parts. Many games over look this, but Gladiator did quite a good job in this department.


When listening, it makes you feel like you?re watching Julius Caesar because it sounds like it should. Environmental sounds are pretty good too. The sound of wind rustling the grass, and the waves crashing against the beach all sound very good.

Suggestions:
Fix the camera! The ability to zoom in and out isnt enough. Add multiplayer as well, it would make the replay factor much higher.