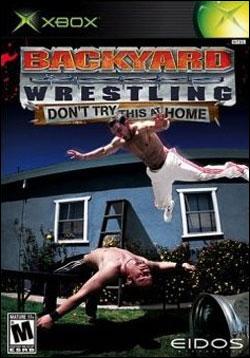 For those of you with limited attention spans (you all know who you are) I?ll make a general statement: Backyard Wrestling is bad. A mixture of mediocre graphics, repetitive gameplay, and quite possibly the most irritating custom soundtrack option ever will make you wish you hadn?t paid $50 for it, or even a $5 rental. However, if you are a hardcore Backyard Wrestling fan or crazed Insane Clown Posse fanatic you may not hate this game.

I always figured that games with wrestling in the name would be best played doing?I don?t know, wrestling. If you are playing Backyard Wrestling you are sorely mistaken. Though I guess it is Backyard Wrestling and not Professional Wrestling, but you?d image that wrestling would still be an integral part in it. Backyard Wrestling is a button masher in quite possibly its worse form. It becomes so tirelessly repetitive that I have to stagger sessions longer than an hour with something enjoyable. It?s painful to play for longer than that.

Quite possibly the most annoying bug, or if it is intentional a terrible choice, is the fact that all weapons thrown appear to heat seek. No matter how far away, unless a large object is obstructing its path, an object will hit you. So, basically, if you do not want to lose, you must immediately pummel the crap out of your opponent then pick up a weapon and do a similar action. Repeat 25 times and you have a match.
Another integral part of the gameplay formula is the reversal. The reversal has been in every wrestling game I?ve ever played it has never been such an important feature. The way combos are set up in this game, they can go on for an obnoxiously long period of time, so unless you are countering expect to be on the ground for a long period of time. The reversal would not necessarily be a bad thing, if used moderately, because no one likes to lose without getting a chance but it is heavily overused. Overused, like most things, to the point of annoyance.
Ok, I?ll just lay it out there I am not a fan of the Insane Clown Posse. I don?t care for their music and I am by no means a member of their near cult-like following. With that being said, playing 10 hours worth of Insane Clown Posse commercial wasn?t enjoyable for me. Their logo and/or likeness is plastered everywhere: clothing, buses, signs?you can even play as them. I?m all for companies getting money from sponsors to produce video games but I really don?t want to be subjected to them every waking second.

I will give Edios credit for one thing; they do have some pretty humorous level and weapon ideas. Playing inside a slaughterhouse is pretty funny. Not only can I play in a meat locker, I can beat my opponent over the head with a severed cow head. Is that tasteless? Yes. It is humorous? Also yes. Sure, PETA won?t exactly be happy with a game where you can throw your opponent into a swaying cow carcass but it gave me a chuckle. Along a similar vein, they did try to add in some level interactivity which I applaud them for, but the amount of it is minimal. You can break tables (which is expected) and you can break threw some wood here and a pillar there, but nothing that truthfully wowed me.

The graphics in Backyard Wrestling are sub-par, keeping with the theme of the rest of the game. The models are blocky, incredibly bland and lack any form of detail. I am playing a next generation console; I expect detail in my models. Generic male and female bodies don?t cut it when I?m surrounded with games showcasing excellent graphics. I would say that Backyard Wrestling would benefit from being developed exclusively for the Xbox graphics wise but I don?t really think it would. I don?t even think it taxed what the PS2 would do; it just appears as though the graphics were of a lower caliber than what I expect in my games.

There is one thing Backyard Wrestling does right and that is blood. When I say right you can substitute to an extreme excess. If you are squeamish (and the slaughterhouse situation listed above didn?t do it for you) this may not be the game for you. Though there is an ungodly amount of blood, once you get passed the initial shock and awe of it you will notice that similar effects are used throughout. The physical damage to the body, if I have ? of my health left or ? seems to change mly, nothing stood out graphically. I tried to even look for details and such, but really there wasn?t much. Graphics are another area where Backyard Wrestling truly lets me down.

Sound is one of the areas where I was most frustrated. With Insane Clown Posse sponsoring and providing the music, I truthfully wasn?t expected a whole lot that would fit my musical taste, but that is not something I can judge since it is a personal preference. I was very true in that statement and there also wasn?t much of a variation in genre, leaving me let down in the soundtrack.

With some further exploration of the menus I noticed that there was in fact the custom soundtrack option. One of my favorite features of the Xbox I was excited about this. I opened it up and looked at how it was set up and realized that custom soundtrack capabilities were very much tacked on. To enable just your soundtrack you have to first uncheck the entire current soundtrack one by one. Though I didn?t like doing this I thought I?d just have to do it once and it would be done. So, I unchecked them all and checked my entire custom soundtrack. I was happy, especially since doing anything violent with Billy Joel in the background is humorous. I then turn my Xbox off and come back to it later that day and turn it on to hear American Hi-Fi. I think, well there must be something wrong, I check the settings and low and behold all the settings were put back to default. After that I merely muted the music, I was incredibly frustrated by the whole process.

The sound effects and voice acting were average at best, nothing stood out but nothing truthfully annoyed me, your standard fare. However, the terrible utilization of the custom soundtrack feature did hurt my final thoughts on the whole situation.

Suggestions:
Eidos, you have a license right now that could sell a lot of copies. Not to me, but to those who enjoy the Backyard Wrestling videos. I suggest totally revamping the wrestling engine to make the game play more like a wrestling game and less like Final Fight. Avoid heat seeking weapons whenever possible. Use higher quality models on most of the game, the current ones do not compare to your competition. Definitely add some variety to the default soundtrack and integrate the custom soundtrack option much more than you do currently. Put the Insane Clown Posse in the game occasionally (if you are continually sponsored by them) but do not use it so much it becomes obnoxious.