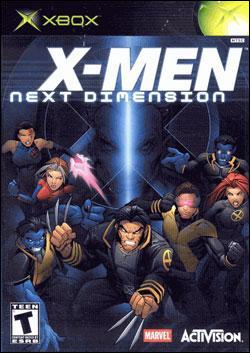 In the world of comics, no other team of superheroes is more loved then the X-Men which is why this is not the first (or last) attempt to bring them to the consoles. Part of the appeal is that these superheroes have nifty powers and have interesting background and individual stories of their own. Through the fighting genre we get to catch a glimpse of their powers in action."

read more
X-Men Next Dimension is the only fighting game that recreates the epic superhero battles from comics and film. Leaving the traditional arena, you carry your battles across expansive 3D levels, using advanced fighting combos, aerial combat and dynamic environments to wreak havoc on your foes.
Unlock Everything
Hold the left trigger, then press RIGHT, RIGHT, LEFT, LEFT, DOWN, UP, B (or X) on the main menu.

Overall: On the plus side, there are a lot of playable characters in this game, and several different costume variations for each one. Also, the levels are very large and interactive as well.
Gameplay: The game itself doesn't play as smoothly as DOA3 or Mortal Kombat. The gameplay feels slow and limited.
Graphics: The graphics aren't the best. The Xbox is capable of much, much more. And the moves are sometimes inconsistant- you can be on the ground one second, and standing up the next. At times, this game lacks fluid movement.
Sound: Overall, the sound is very weak. The music is average, unmoving filler. The sound effects are alright, I suppose. But the voices, while matching the characters very well, sound muffled at times. It's often hard to hear what the characters are trying to say.
Suggestions: I really don't know how to fix this game, other than to say "make it more like DOA3," but my suggestion to GAMERS is this: Rent this game first, before you buy it like I did. I only spent $20 on it, used, and I still feel ripped off. I don't think anyone but hardcore X-Men fans will enjoy this game.

Overall: I agree with DaGameBoy on this game. Wonderful game! I don't know 'bout code_warrior beating it in 35 min, but I do know that within that amount of time, there's no way that he unlocked the secret characters, levels and costumes. I bought it the day it came out and STILL haven't unlocked Dark Phoenix, Pyro or 3 levels.
Gameplay: Gameplay was great! Takes ideas from many games to incorporate into one solid fighter. At least rent this one and give it a try.
Graphics: Graphics are nice, but like Adam-XBA said, the backgrounds could have been done a little nicer. On visuals, code_warrior doesn't have a clue. There is no 80's or 90's console that could even come close to displaying these kind of graphics and maintain 60 fps at the same time. But then again, maybe code_warrior has got one of them there,totally hype Atari 2600's ;)
Sound: Sound is good, but like Adam (again) stated, some sounds become repetitive. Such as the stuff said when the characters come into the fight. Would have been nicer to have random saying spoken. Also, custom soundtrack would have been a + as well. As for code_warrior's midi comment, maybe it's ur sound system dude :) Cause on my Dolby Digital 6.1 (yeh, I'm talking complete surround sound) kickin' with over 600 watts of pure power, it sounds pretty good.
Suggestions: Custom soundtrack. Tag team play. Touch up the backgrounds a bit. Add some random sayings when characters come into the fight.

Overall: Totally e-X-cellent! This game rocks and is very tight and has most, if not all, of my expectations of the game. If you are into fighting games such as DOA3, etc, this game is a definite must for your collection. With an initial 17 choosable characters, 4 unlockable and 4 secret, your choice of butt kicking lasts for awhile. If nothing else, it is worth a definate rental and play through the game in story mode as it can be beaten in about 2 hours or so.
Gameplay: Gameplay runs at a smooth 60 fps. The developers took some great ideas from other great games to make this. Every level, yes every level, is unending. You can kick Magneto from the library window out to the waiting steps below. Then toss him out to the cement basketball court, then split the ground open to find a waiting X-Men Blackbird jet and yet another playing field. Then kick him around a bit more, through a door, then whack him onto an elevator that takes you right back up to where you started again. Every level is built the same. As noted earlier, there are 17 characters, with 4 unlockable and 4 hidden. Then on top of that there are multiple unlockable levels as well as 4 different unlockable costumes for all 25 characters. Each X-Men and Brotherhood of Mutants has 4 "special" moves and variants of these moves, as well as the usual assortment of moves. The environment can be interacted with, ie. crates tossed, cars bashed, benches broken, etc. Use Phoenix and toss a grand piano at your opponent, and who said Jean Grey had no musical talent :) Some characters have the ability to fly for a limited amount of time as well. Ground as well as aierel combos are also available to add to the amount of entertainment values. I look forward to spending many hours unlocking hidden characters/levels as well as finding out all the details about all levels.
Graphics: Graphics are done really well. Not as good as DOA3, but that's hard considering it's a PS2 port with a little bit of enhancement for Xbox. The intro and cutscenes are awesome though! It really helps to immerse you in the story and add to the enjoyment of the game. Some of the backgrounds are a little fuzzy at times, but nothing to complain about. Characters move seamlessly in fighting and shadows render great. Lighting could have used some work as well as Gambit's card lighting as well at times looks like circular blobs of .gif bitmap light instead of vector based. Phoenix's fire is done very nicely and one of her special moves shows it off great. As noted, graphics of the characters in the cutscenes is awesome. However, the characters themselves in the game could have used a little bit of work. Not awful, but just a bit of rounding in certain areas. However, this may be attributed to it being a port. Every once in awhile, some pillar or whatnot will get in the way for a split second. But it's not bad since the game moves quickly. All in all, the graphics really well done.
Sound: Sound is done great as well. What would have made it better would be the ability to add your own tracks. However, voice overs are done well and Patrick Stewart gives Prof. X just the right touch. The background music helps add mood, but does not overpower the game. Sound effects add a nice touch when hitting electronic panels and getting your head bashed against the TV screen (you'll see what I mean).
Suggestions: Xbox Live would have been an added bonus. Also, take advantage of the Xbox's capabilities and make new downloadable leters like they did with DOA3. Great job!