After more than a year of speculation, we finally know what Microsoft’s new motion-control system is called. For those that have referred to it for a year as Project Natal, meet Kinect for Xbox 360. 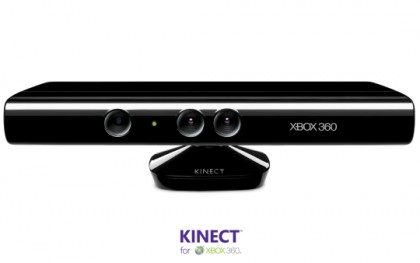 Get ready to Kinect to fun entertainment for everyone. Microsoft Corp. today capped off a two-day world premiere, complete with celebrities, stunning physical dexterity, and news from a galaxy far, far away, to reveal experiences that will transform living rooms in North America, beginning Nov. 4. Kinect will roll out to the rest of the world thereafter.

Opening with a magical Cirque du Soleil performance on Sunday night attended by Hollywood’s freshest faces, Microsoft gave the transformation of home entertainment a name: Kinect for Xbox 360. Then, kicking off the Electronic Entertainment Expo (E3), today Xbox 360 invited the world to dance, hurdle, soar and make furry friends for life - all through the magic of Kinect - no controller required.

"With ‘Kinectimals’ and ‘Kinect Sports,’ ‘Your Shape: Fitness Evolved’ and ‘Dance Central,’ your living room will become a zoo, a stadium, a fitness room or a dance club. You will be in the center of your entertainment, using the best controller ever made - you," said Kudo Tsunoda, creative director for Microsoft Game Studios.
Microsoft and LucasArts also announced that they will bring Star Wars® to Kinect in 2011. And, sprinkling a little fairy dust on Xbox 360, Disney will bring its magic to Kinect as well.

"Xbox LIVE is about making it simple to find the entertainment you want, with the friends you care about, wherever you are. Kinect is about making that experience more natural and engaging than ever before," said Marc Whitten, corporate vice president of Xbox LIVE at Microsoft. "Once you experience your movies, music, sports and games with Xbox LIVE and Kinect, you won’t ever want to go back."

Using Kinect is as simple as stepping in front of the sensor. It recognizes you, responds to your gestures, listens to your voice, and, best of all, it works with every Xbox 360.1

• "Kinect Adventures" (Microsoft Game Studios). Float in outer space. Experience the thrill of roaring rapids. Tackle mountaintop obstacle courses. And dive into the deep to explore a leaky underwater observatory - all from your living room. With "Kinect Adventures," you are the controller as you jump, dodge and kick your way through exciting adventures set in a variety of exotic locations.

* "Kinectimals" (Frontier Studio, Microsoft Game Studios). A wide-eyed Bengal Tiger cub cocks its head to the side and playfully peers at you. Memories of your first trip to the zoo come rushing back. "Kinectimals" invites children, their parents and animal lovers of all ages to build lasting friendships with some of the world’s most exotic creatures. Just like real pets, your "Kinectimals" will come running when they hear your voice, respond to commands like "jump," "roll-over" and "play dead," and purr with joy when you scratch them behind the ears.
* "Kinect Joy Ride" (Big Park, Microsoft Game Studios). 3 ... 2 ... 1 ... Go! "Kinect Joy Ride," the first controller-free racing game, will take you and your friends on the ride of your lives - no drivers license required. "Kinect Joy Ride" reinvents driving and Kart racing by adding massive jumps and full body stunts to the classic Kart racing action. With a host of cool features and game modes you can take off for the ride of your life by yourself, pick up a co-pilot or team up with your friends and family to take on the world.

* "Kinect Sports" (Rare, Microsoft Game Studios). Turn your living room into a world-class stadium, bowling alley, soccer pitch or arena. With "Kinect Sports" you’re not only the star player, you are the controller - through the magic of Kinect for Xbox 360. See a ball? Kick it. Spike it. Even give it a little top spin. "Kinect Sports" features soccer, beach volleyball, bowling, table tennis, boxing and multiple track and field events.

* "Dance Central" (MTV Games). "Dance Central"TM is the first full-body, controller-free dance video game with fun choreography for beginners and experts. Featuring full-body tracking, the magic of Kinect for Xbox 360 allows you to experience real dance with your friends and family. Whether you’re rehearsing in Break It Down! or owning the stage in Perform It, you’ll be introduced to more than 600 moves in the game and more than 90 dance routines all created by professional choreographers. The game features tracks from an amazing mix of pop, hip-hop and R&B artists including Lady Gaga, No Doubt, M.I.A., Bell Biv Devoe, and more. Take your moves to the next level while connecting with the music you love!

* "Your Shape: Fitness Evolved" (Ubisoft). Get the most out of Kinect with "Your Shape: Fitness Evolved." Unlike other games, the proprietary Player Projection technology of "Your Shape: Fitness Evolved" puts your body into the game for the ultimate experience. You’ll physically interact with virtual environments in ways you’ve never seen before, and you’ll be captivated by unique and exciting visual effects that respond to your movement and impact. Burn calories your way - choose a personal trainer to help you meet your specific fitness goals, take a yoga or martial arts class, or play fun family-friendly minigames. As you exercise, you’ll receive specific feedback on your every move, thanks to the game’s real-time precise tracking system. You won’t notice how hard you’re working until you see the results!

Extraordinary Entertainment
Offering so much more than just games, Kinect for Xbox 360 takes your entertainment to the next level. Beginning this holiday, the Kinect Hub puts your favorite movies, TV programs, music and live sports all in one place - completely controller-free.

Jump right into a movie in instant-on HD in 1080p or your favorite college bowl game by simply saying "Xbox, play," or browse your entire song library with a wave of a hand. Kinect also creates new ways for friends and family to have fun together.

With Video Kinect2, share a smile with distant friends and family as you open a window into living rooms around the world. Providing entertainment for everyone, with the power of Kinect, the Xbox LIVE experience is more intuitive, social and interactive than ever before.