During the Super Street Fighter 4 panel at Comic-Con today, producer Yoshinori Ono announced Street Fighter III: 3rd Strike Online Edition, promising he hasn’t forgotten about the Street Fighter III series and intends to bring it back to fans.
What he didn’t bring, unfortunately, was much in the way of any details. We’re presuming it’ll probably be a digital release of the game over Xbox Live Arcade and PSN with online play built in, but that’s pure speculation -- Ono announced no specific details for it, saying they’re "going to take our time to bring this out" and that it’s "not going to come out in the immediate future, but just let everyone know that Street Fighter 3 is coming back." Ono also told fans that if there are any features they want to see in it, then "go to Capcom Unity and tell Seth Killian." 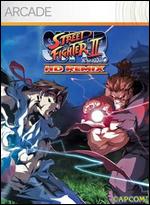