Twin-stick shooters have been one of the most popular genres on both the Xbox Live Arcade and PlayStation Network over the past several years, and Electronic Arts is looking to capitalize with the release of a new one with a unique twist. MicroBot puts you inside the human body fighting off diseased cells that have bonded with nanomachines intended to fight diseases.
It’s a bit of a strange-sounding premise, but it has an interesting art style and the game is said to dynamically create new levels so that things are different each time you play. There’s a focus on upgrading your ship’s weapons and parts, including upgrades that can make you move or fire faster, bolster your defenses, and more. MicroBot also features drop-in/drop-out support for two-player multiplayer, which is always a welcome addition to any multiplayer game.

The press release notes that the game will be coming during winter 2011, which seems like an awfully long time away for an XBLA/PSN game. We’ve asked EA for clarification if they mean this winter or the winter at the end of next year, and we’ll report back as soon as we find out.

UPDATE: As expected, the game will be coming out sometime this winter, not the winter running from 2011-2012. So you can look forward to MicroBot making it out on Xbox 360 before spring rolls around. 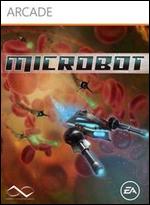