Activision has released the first teaser trailer for Spider-Man: Edge of Time.

Officially announced last week and set for release this autumn, it’s in development at Beenox, which was responsible for the fairly decent Spider-Man: Shattered Dimensions.

Activision said: "Spider-Man: Edge of Time challenges the player to take on the roles of both classic Amazing Spider-Man and Spider-Man 2099 to correct a timestream gone awry and prevent a catastrophic future brought on by the early and untimely death of Peter Parker." 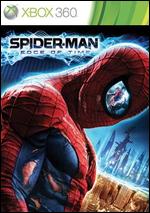