(RUMOR) - More details on the next Xbox 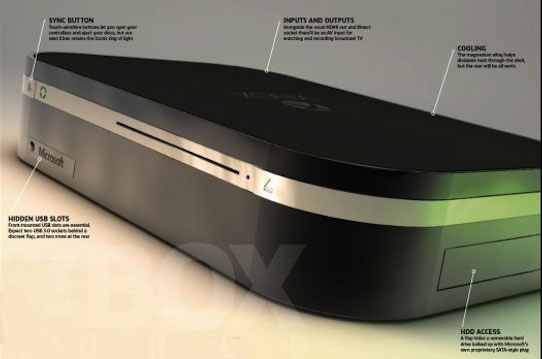 The Next Xbox Will Have a Quad-Core Processor, 8GB Ram, Blu-Ray, Kinect 2.0 and More!

Xbox World has a report on the next Xbox, which will likely be called just Xbox and not Xbox 720 or Windows Xbox 8 or something. The next Xbox is expected to have "four hardware cores, each divided into four logical cores" and 8GB of RAM and more goodies.

Currently codenamed Durango, the next Xbox will also support Blu-Ray discs, feature directional audio, TV output and input, have an "innovative controller" and introduce Kinect 2.0. Supposedly, AR glasses like Google Glasses will be released in later stages of the next Xbox. A lot of this confirms earlier reports about the Xbox 720 so it’s looking more and more real. The picture above isn’t official, instead Xbox World created the mockup from what industry sources and leaks have told them. Xbox World says:

"We built ours with the same glossy face and patented VapourMG magnesium alloy Microsoft uses for its Surface tablet, and modelled the silver band after its new ’Wedge’ touch keyboard and flexible Arc Touch mouse. The future will be black, sharp and curved."