EA: Medal of Honor is officially on shore leave

"The game was solid, but the focus on combat authenticity did not resonate with consumers," EA COO Peter Moore said. "Critics were polarized and gave the game scores which were, frankly, lower than it deserved. This one is behind us now. We are taking Medal of Honor out of the rotation and have a plan to bring year-over-year continuity to our shooter offerings."

Gibeau continued, "If you look at Medal of Honor as a specific case, it was really about a hit missing." 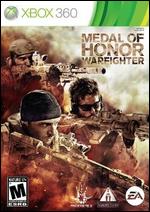