Could Skype be the Next Xbox’s Killer App? 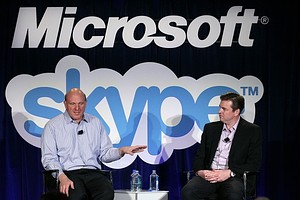 As we look ahead to Microsoft‘s announcement of its next Xbox, there’s as much attention being paid to non-gaming uses as there is to actual games. That’s good and bad — while broader appeal is always nice, this is a games console and it needs to attract gamers. The notion of a TV tuner has gotten a lot of press, but there’s one other app that could prove crucial to marketing and selling the next Xbox: ubiquitous videochat client Skype. For one thing, you don’t buy a company for $8.5 billion and then not enable it on a new piece of hardware.

There was discussion of whether or not Skype could move huge numbers of Xbox Kinects back when Microsoft first bought it in 2011, but it never really happened. Not only was an expensive Xbox/Kinect bundle a tough sell for videochat features alone, people all over the world were already comfortably using Skype on tablets and laptops. Could a new piece of hardware be what Microsoft needs to jumpstart the idea of a Skype-enabled console?

Michael Pachter, probably the gaming industry’s most capable self promoter of a business analyst, thinks so. He reiterated his prediction in a recent episode of “Pach-Attack,” where he said that Skype was a killer app because it “brought Grandma into the mix.” He imagines a world where the Xbox-enabled family gathers on the couch just before bedtime to say goodnight to their Xbox-enabled grandmother.

Of course, Skype is already a widely available application across a broad number of devices, so it’s hard to imagine something like that truly qualifying for “killer app” status. What Kinect and Xbox have to offer is a presence in the living room, a wide angle lens, and, possibly, but not necessarily, a simple-to use interface. It certainly gets closer to the sci-fi version of videochat, where the the video chat is an appliance in the house, like a phone, and you use it sitting on the couch.

It’s a nice notion, if not world-shattering. But even if it’s not a killer app, this could still be a valuable technology and an important selling point. Most importantly, because Microsoft owns Skype, it could easily leverage this by not allowing it on the PS4.

It brings us to the essential question of the next generation.  From a marketing and a broad narrative perspective, Sony is focusing on core gamers while Microsoft is seeking a broader audience. But in a world where all the biggest third-party AAA games are multi-platform, it can be hard to tell the leading two systems apart based on their games libraries alone. If the publishing landscape for the PS4 and the next XBox looks like it did for the Xbox 360 and the PS3, we’ll have two systems with very similar games. In that situation, things like Skype, TV tuners and other non-gaming applications start looking much more important.