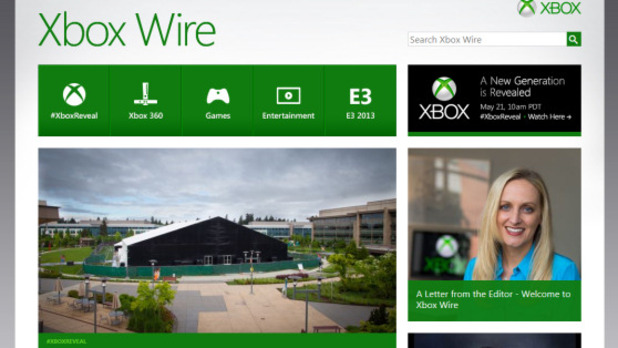 Microsoft has launched a fresh website for all of its next-generation Xbox announcements. Larry Hryb, aka "Major Nelson," unveiled Xbox Wire over Twitter today.

The site is currently in beta, according to editor Lisa Gurry in an introduction.

"You’ll see some familiar faceson Xbox Wire," she wrote. "Our executives will write blogs occasionally, but most of our blogs will be from everyday people on the Xbox team. Our own Major Nelson will appear as well — both via blog posts and through interviews — of course, Major’s fans can also continue to follow along with him at MajorNelson.com. I’m lucky to spend my time at work living and breathing all things entertainment, and I’m excited to serve as your editor here at Xbox Wire."

The company is preparing for its big Xbox reveal on May 21, which you can watch live online starting at 10 a.m. PDT. Gamers are still debating what the console’s official name will be, whether it will require an always-online connection, and even whether it’s used-games-friendly — or backwards compatible.

Microsoft, on another note, could also be doing away with its points-based currency model.

The industry is changing, and a new generation means major changes in how we interact with technology. Microsoft, along with Sony and Nintendo, must respond to unfamiliar and increasing pressures as we forge forward.

One thing remains the same, though — at least for the time being: Xbox 360 is still the current highest-selling system in the U.S. Hryb revealed that the console remains No. 1 with 130,000 units sold last month, according to April’s NPD report.