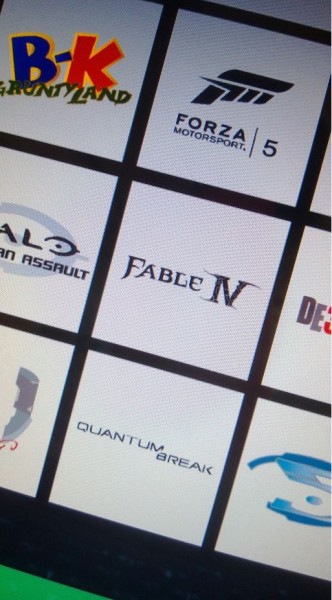 E3 2013 fever is officially among us now, with just days ago until the annual festivities kick off once again at the LA Convention Center. Sony and Microsoft will be attempting to wow the world with their next-gen PS4 and Xbox One game lineup, but if rumors are to be believed, we may already know what Microsoft are planning to show as part of their Xbox One software list.

A vast list of games have shown up on Neogaf, along with an image backing up some of the titles. Bearing in mind how easy it is to compile a fake list with some visual eye candy, it goes without saying that the following information should be treated with a very large pinch of salt.

Assuming it is true though, Microsoft will be be unveiling the rumored return of famed-developer Rare at the event, with Banjo Kazooie 4: Grunty Land and wait for it, a brand new Killer Instinct game as well. On top of that, there’s a listing for Mirror’s Edge 2 as previously speculated, and surprise entries for a Rainbow 6 Patriots game and Dead Rising 3 which has apparently now become an Xbox Live exclusive.

The usual suspects are there such as Battlefield 4 and Call of Duty Ghosts, but the Neogaf crowd are fairly universal in calling this a fake attempt to brew up hype and interest in Microsoft’s event further. It’s already been confirmed that an old-school IP is going to be announced at Microsoft’s event, but will it turn out to be both a new Killer Instinct and Banjo Kazooie game from Rare?

Take a look at the full list here, along with the accompanying image and let us know your initial thoughts on it. The Banjo Kazooie logo looks very dubious to us, but you never know. What do you think about this? It will be some lineup from Microsoft if this list turns out to be accurate.

Editor’s Note:  Once again, this list should be taken with a large grain of salt, as there is no way to confirm the source of the photo or the certainty of all the titles on the list, but even the most questionable of the titles on this list have been rumored to be in the works for some time now, so it would make a lot of sense for these titles to use Microsoft’s E3 stage as their coming out party.  If this is not the perfect lineup of titles that Xbox One needs to impress naysayers on Monday Morning, it’s pretty darn close.  I’ve still got my fingers crossed for a Crytek-powered reboot of Perfect Dark, though.

Strangely, there’s no mention of the Disney Interactive/Harmonix Fantasia game that was announced yesterday...which might mean no awkward highjinks on stage.  Also take note that there are no games on the list labelled "Kinect" or "Avatar", an omission that by no means indicates that Kinect 2.0 won’t be featured at the Media Briefing (since all Xbox One games are by design Kinect enabled), but still seems to back up the promises made by Major Nelson last week that Microsoft is indeed listening and that the focus of next week’s event will truly be on the games.  Fingers and toes crossed.