CD Projekt Red has confirmed The Witcher 3 for Xbox One on stage at Microsoft’s E3 conference today. It’s also a PC and PS4 game.

The Xbox One version will have optional Kinect voice commands for quick-switching during combat and casting spells.

The UI will also be ported for SmartGlass purposes such as inventory and character management.

The first footage of The Witcher 3 was then shown and it was gorgeous, with villages afire, swords a-swishing and monsters of various kinds a-drooling and a-mauling. We’ll upload it whenever it becomes available in high quality. 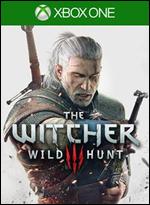