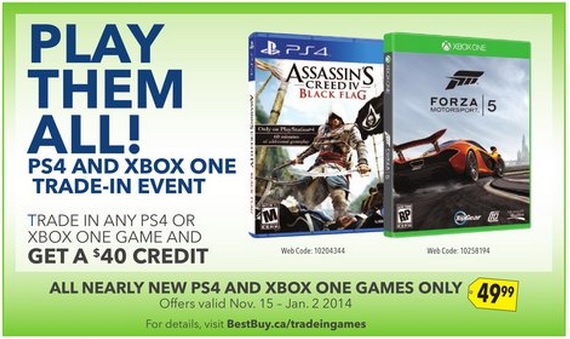 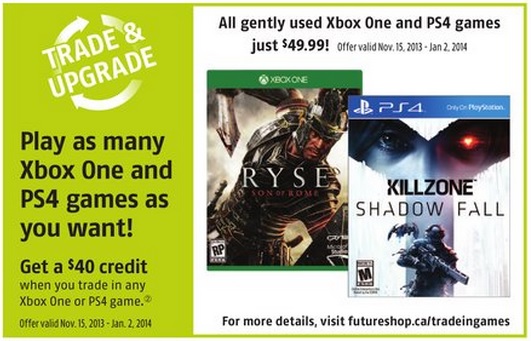 It doesn’t take a genius to figure out that the above offers from Future Shop and Best Buy are fantastic deals for early Xbox One adopters, as it allows gamers to "try out" (read purchase brand new and then trade back in) any number of Xbox One and PS4 titles at retail for only $20 a pop.  So if you’re curious about a game like Ryse but wavering between purchasing it and a different game for fear of its long-term replay value, you now have less reason to hold off playing it at launch.  And should you be one of those treacherous, PS4-purchasing cretins that sees the error of their ways before it’s too late, you can also trade in those PS4 titles you bought towards Xbox One titles at only a $20 penalty after you pick up your Xbox One.

And what should happen to all those lonely, "nearly new" titles destined to fill Best Buy and Future Shop’s used game shelves? A $10 discount of course! That’s right, gamers who are a tiny bit more patient won’t have to wait long for titles like Forza Motorsport 5 and Dead Rising 3 to go on sale, as the retailers will be knocking $10 off the top of any used copies they take in. For gamers and retailers, it’s an environmentally friendly and frugal win-win. As for the publishers, well, they knew this ultimately was going to happen. Nature of the beast, my friends.