Since we unveiled Xbox One in May as the all-in-one games and entertainment system, we’ve been highlighting all the great games coming at launch and beyond.  We’ve talked about the award-winning Titanfall – an Xbox platform and PC exclusive; shared content exclusives we’ll have from hit titles like Call of Duty: Ghosts and Battlefield 4; discussed new features from hotly anticipated titles like Forza Motorsport 5, Ryse: Son of Rome, andDead Rising 3; and highlighted cross-platform blockbusters like Destiny, Watch Dogs, andAssassin’s Creed 4: Black Flag.

We’ve talked about how Xbox One was designed for gamers – with the most active multiplayer community and new features like Smart Match, Game DVR and Upload that will continue to make the Xbox Live community the best place to play and connect with other gamers. We also talked about our shared vision with key gaming entertainment partners like Twitch and Machinima that will take your gaming experience to a level not available anywhere else.

We’re proud of our Xbox One games line-up. And we’re proud of the innovative features we’re delivering to make gaming great on Xbox One. Today, we’re adding to the story – and sharing how Xbox One is as good at TV & entertainment as it is at gaming. Because we know gamers love both.

As we head toward Nov. 22, we’re showcasing the all-in-one capabilities of Xbox One. This is the real Xbox One in action. Corporate Vice President of Marketing and Strategy, Yusuf Mehdi, and Chief Product Officer Marc Whitten show the best of Xbox One in this new video. And, you can see 10 of our favorite new features below.

#1 – Unleashing the Power of Your Voice
A simple voice command turns on your Xbox One, your TV, your set-top box and your AV system because Kinect for Xbox One is an Infra-Red blaster. And when you say “Xbox On,” your game is always ready to resume from wherever you left off. You can start playing your favorite game, find your favorite show, change channels, turn up the TV volume and more – with the sound of your voice, powered by Bing voice recognition technology.  Just say “Xbox, go to ESPN” and your TV will change directly to the ESPN channel. Or, “Xbox, go to Hulu Plus,” “Xbox, Volume Up,” “Xbox, Mute,” "Xbox, go to Music” – it’s simple. Kinect “talks to” your TV, set-top box and AV receiver, making it easier than ever to navigate entertainment in your living room. 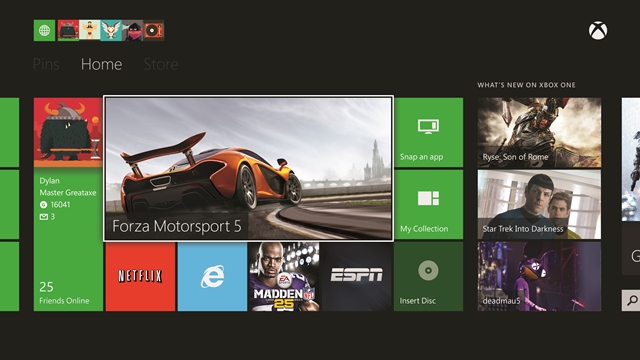 #2 – Biometric Sign In
Kinect can recognize you and instantly log you into your personalized home screen. Your favorite games, shows, TV channels, movies, albums, Skype contacts, recently-played apps and more can be pinned right to your home page – so you can find everything you love quickly. Biometric sign in and personalization extends to everyone in your house – each person has a home screen tailored just for them.

#3 – Instant Resume and Instant Switching
We’ve talked about instant switching before, but now you can see it for yourself in action. The video showcases how quickly you can jump from one experience to another and right back where you left off. You can literally jump from a game to live TV, music, movies, sports, Web sites and back again in seconds, just by using your voice.

#4 – Watch Live TV via Xbox One
Xbox One lets you watch live TV from your HDMI-compatible cable or satellite box, making it easy to switch from games to live TV – all with the sound of your voice, and without having to switch TV inputs. No more multiple remotes, missed multiplayer matches while you’re watching TV, or frustrating delays. Just connect your set top box to your Xbox One and you can watch live TV through your Xbox One.

#5 – Get a Multiplayer Invite, while you are Watching a movie or live TV
Imagine never missing a multiplayer invite, or an epic game battle while engrossed in a movie or TV episode. With Xbox One, TV and games are not separate. You can be watching your favorite show, the big game, or a movie like "Star Trek Into Darkness," and still receive an invite to play a game with your friends. You will always be connected to your gaming community and with features like Smart Match and reputation management in Xbox One, you don’t have to choose between your games and entertainment. 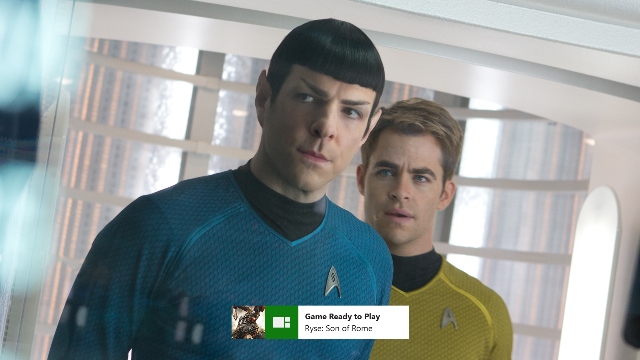 Imagine you’re in the middle of an intense race or a battle and you want to record this ultimate gaming moment. With Game DVR on Xbox One, you can capture your greatest moments, add your own creative touch with Upload Studio and share with your friends. By simply saying “Xbox, record that” your gameplay is recorded. Or, you can take advantage of a five-minute buffer that’s constantly recording in case something remarkable happens and you weren’t expecting it. With the Upload Studio, you can turn your gameplay footage into a work of art, record a taunt over the segment, add a skin and share it with your friends. 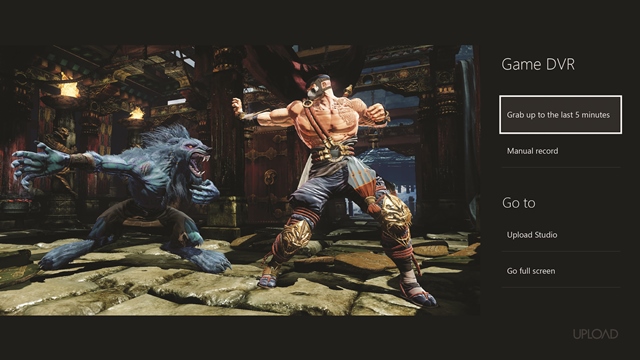 #7 – Do Two Things at Once
You can also choose to snap two experiences together – so you can play a game while you watch TV or listen to Xbox Music. Or, watch the big NFL game while you manage your fantasy football team. For gamers, snapping Machinima opens up a whole new world of opportunity. Just by saying “Xbox, Snap Machinima,” the Machinima app will be snapped next to “Dead Rising 3” or your favorite game, and walk-throughs, game reviews, help videos and more will appear. 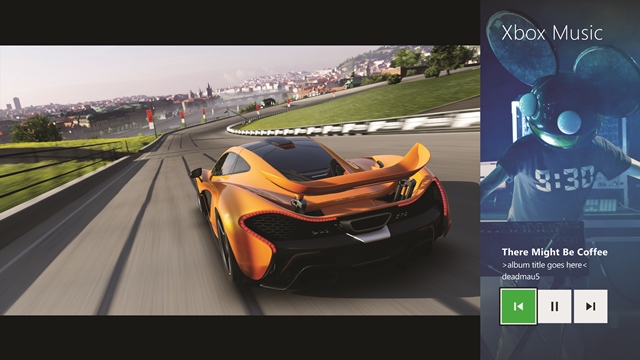 #8 – Skype on the Big Screen, With Groups and Free Long Distance
Skype is amazing on Xbox One, offering the only big screen experience with Group Video Chat with up to four people. Kinect is the only camera in the world that will follow the caller and pan and zoom automatically as if you had your own camera man. You can talk with your friends while surfing the Web or checking the latest stats of a sports team. And have full 1080p video calls for one-to-one chats on your TV. 1 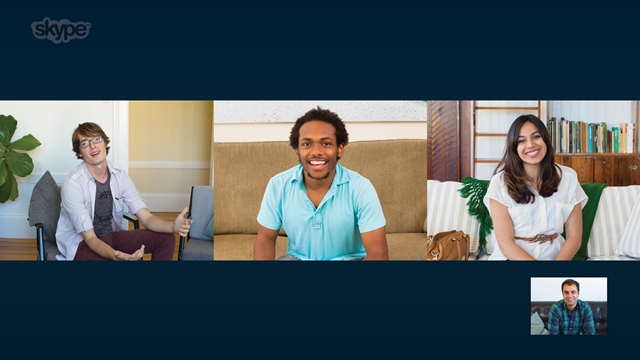 #9 – OneGuide Delivers Personalized Guide to TV, Apps and More
Xbox One has its own TV listings guide that can be navigated with your voice. Say “Xbox, what’s on Discovery Channel?” and boom, there you have the list of shows.  Call out your favorite TV show by name and start watching it instantly.  And, Xbox One is the only system that brings together your favorite TV channels and entertainment app channels into one screen.  Create your own personal Favorites in OneGuide, so you can easily choose what you want to watch – whether it’s on Fox, CBS, NBC, ESPN, Hulu Plus or the NFL on Xbox One app. For the first time you don’t have to juggle multiple screens across cable TV, video streaming services and other entertainment apps to quickly find the entertainment you’re looking for. 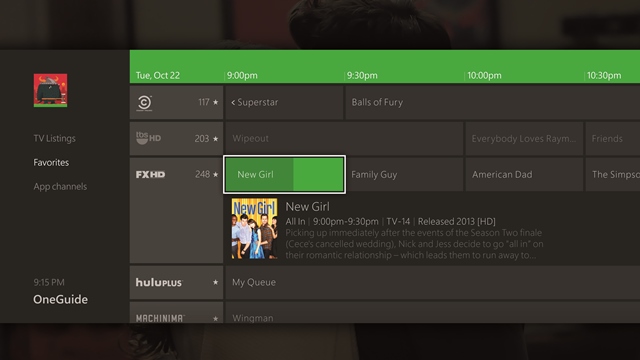 #10 – Xbox SmartGlass Enhances Gaming in New Way
You can use the Xbox SmartGlass app for Xbox One to stay connected with the Xbox Live community to check your Achievements and game progress, watch Game DVR clips and message your friends in the living room or on the go. Xbox SmartGlass can be used to navigate the Home screen, search, or browse the web. And, on Xbox One, Xbox SmartGlass displays game help and hints during gameplay and can support up to 16 devices at one time across your favorite games and entertainment. You can also search the entire Xbox catalog and pin content so it’s waiting for you when you turn on your console. The Xbox SmartGlass app is a free download for Windows 8, Windows Phone 8, iOS and Android devices and will be available on Nov. 22. 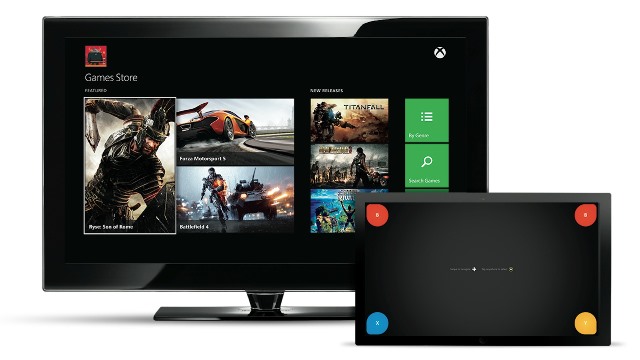 Today we’re sharing the very first wave of some of the biggest names in entertainment, coming to Xbox One, including Netflix, Hulu Plus, Machinima and Twitch. Just like on Xbox 360, new apps will be rolling out on a regular basis. Check out the full list of partners launching throughout this spring by region here.

If you’re ready for the complete, all-in-one games and entertainment system, we’re just mere weeks away. Xbox One launches Nov. 22.