Xbox One will launch with SkyDrive Media Center, SkyDrive channel 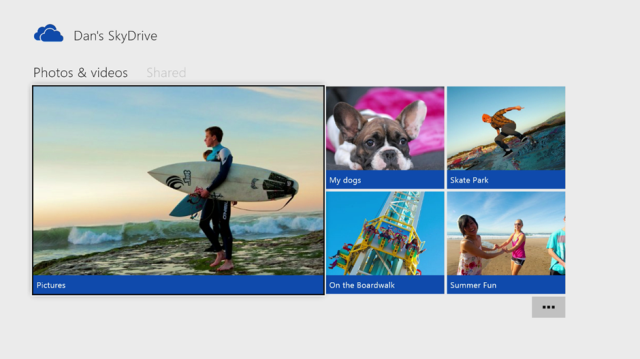 Today we are excited to announce that SkyDrive on the new Xbox One will bring your photos and videos to your TV. Starting on November 22, when the new console becomes available, SkyDrive on Xbox One will provide a seamless, beautiful experience for you to kick back and enjoy photos and videos in your own personal collection, or those shared with you.

The app also takes advantage of exclusive Xbox One features: You can open photo albums from channels in the OneGuide, play music alongside your slide show with Xbox Music, and control the whole app with gestures and voice, courtesy of Kinect. It all starts with the simple command, “Xbox: Go to SkyDrive.”

SkyDrive is the best way to see your photos and videos on the big screen via Xbox One. The SkyDrive and Xbox incubation teams are passionate about bringing your photos to Xbox, so we got together and did just that. Jeff Henshaw, head of the Xbox Incubation team, sat down with Larry Larsen from Channel 9 to demo the app.

We focused on making it easy to find photos and see them in a beautiful slide show. I recently added my whole archive of family photos to SkyDrive—about 40 GB. With this app, I was able to pull up pictures from a trip I took years ago to Cape Cod with my family that I had never bothered to dig through my computer to find.

The second key experience we focused on was viewing shared photos and videos. For example, my sister took pictures of her husband’s birthday party in Ohio and shared them with me on SkyDrive. It was easy for her to share them, and they showed up on my TV automatically.

The third experience we wanted to work great is what we dubbed “Snap and see.” Every photo I take with my Windows Phone gets automatically uploaded to SkyDrive. So, after a day of taking pictures, I can just turn on the TV and show them to my family. I don’t have to think about it. It just works great.

When building the app with the Xbox Incubation team, we added actions we thought were fun. If you have a really large image, like a picture of a sports stadium or city landscape, for example; you can zoom all the way in so it feels like you’re there. When you’re just thumbing through images, the experience is fast and fluid because we only download and show a (1080p) thumbnail. But if you are on a large image, you can use the right trigger on the Xbox One controller to zoom in, which downloads a higher resolution version. You can pan around the higher resolution version with the right stick.

We also wanted to make the standard slide show more engaging. Instead of just a simple fade, your photos slide and zoom into view—commonly known as the Ken Burns effect.

A personal cloud and entertainment experience exclusive to Xbox One

The Xbox is an all-in-one entertainment device. To help you find content, the Xbox OneGuide is the single source to browse and find live TV, on-demand streaming video from apps, or even your own SkyDrive photos or videos. Apps can plug into the OneGuide platform and show content in the same way you would traditionally read a TV guide.

SkyDrive automatically adds your Pictures folder and the Camera Roll as channels for quick access, but you can also add any folder from the SkyDrive app into the list of app channels. When you select a photo, you are taken directly into a slide show of the picture and the rest of the album. For example, if my friend was on vacation in Hawaii, he could share a photo album with me and I could add it to the OneGuide. Any new pictures he puts in his album will show up in my app channel. This is a much easier way to get updates than looking through the app. 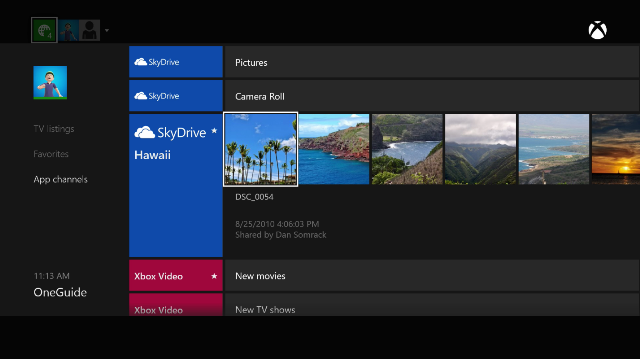 On the Xbox One, apps can be snapped side by side and run simultaneously, which is especially useful for SkyDrive. My favorite combo is snapping in Xbox Music to add a background track to my slide show. 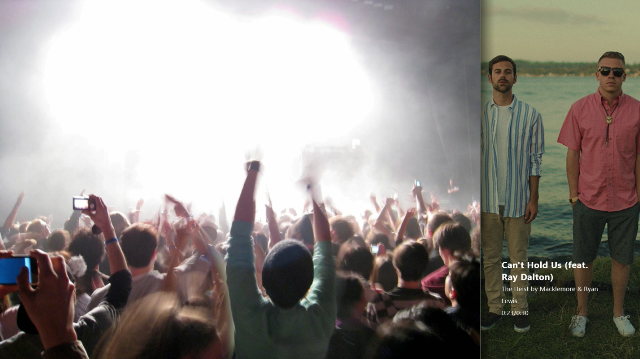 We hope you are as excited by the beautiful experiences of SkyDrive in Xbox One as we are. After you set up your Xbox One, just say, “Xbox: Bing SkyDrive” to get started. Until then, get ready by uploading your photos and videos to SkyDrive.