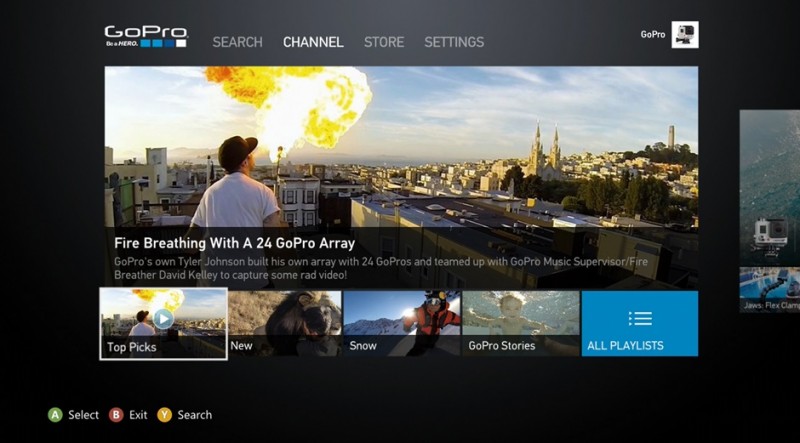 In January, we promised that the GoPro Channel would be making its way to Xbox and this week, we’re excited to deliver the app on Xbox 360. On Tuesday, Xbox Live Gold subscribers around the world* can immerse themselves in wild adventures with the GoPro app on Xbox 360. Now you’ll be able to stream and curate GoPro video content from the largest screen in the house and to kick off the launch, GoPro is offering two exclusive (read: AWESOME) videos that the Xbox community will get one week before they’re available elsewhere.  The first is an amazing basketball trick shot – a couple basketballs, a car, and a GoPro camera, sure why not?! Check out the teaser clip below, just don’t try this at home. The second exclusive video is an extreme snowmobile jump that will tie your stomach in knots – look for it on Tuesday only on the GoPro app on Xbox 360.

“The GoPro Channel app will bring the best of GoPro originally-produced and user-generated content into the homes of millions of Xbox Live Gold customers,” said Adam Dornbusch, Head of Content Distribution at GoPro. “We’re excited to launch with exclusive content for early adopters of the app and stoke out the Xbox 360 community with hours of engaging and inspiring GoPro videos through the Channel.”

With GoPro on Xbox 360, you can check out what extreme adventurers from around the world are up to by browsing and searching through categories such as sports, adventure and athletes. Watch videos individually or back-to-back within a category if you can’t get enough. Feeling inspired to get out there and GoPro yourself? Xbox Live Gold members will be able to purchase GoPro cameras and accessories directly through the app, and orders in the U.S. will be fulfilled by the Microsoft online store.

Stay tuned for more details as we get ready to launch GoPro on Xbox One this summer. 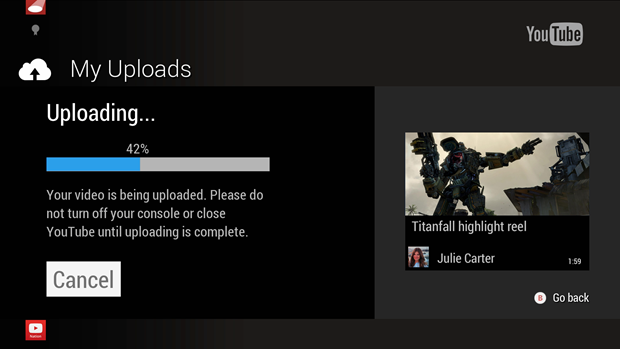 Game DVR and Upload are among the most used apps on Xbox One. We know how important it is to be able to easily watch and share video clips, and starting tomorrow we’re rolling out an update to the YouTube app on Xbox One that integrates Game DVR and Upload with YouTube**, making it easier than ever to capture and share game clips with the world.

Now, use Game DVR to capture epic gaming moments, edit them in Upload Studio, and, with the simple click of a button inside the YouTube app (look for My Uploads**), share them instantly to your YouTube channel. The updated YouTube experience also allows you to watch YouTube videos in Snap Mode, earn Media Achievements, and adds YouTube channels to OneGuide for instant access to YouTube videos right next to your favorite TV listings or App Channels.

*Xbox Live Gold required; GoPro is launching on Xbox 360 in all Xbox Live markets
**In Settings, elect to “Share game clips” and “Share on social network”