The coming of age story is a timeless, universal narrative that we’ve seen in many different forms over the years. With the release of “Ori and the Blind Forest” this Fall, developer Moon Studios is taking the coming of age tale in a beautiful new direction.

“Ori and the Blind Forest” tells the story of Ori, a Guardian Spirit, who, at birth, has been cast away from his home. He grows up with Naru, his ‘stepmother’ and lives happily with her until the forest suddenly decays. After that, Ori has to venture out and find out more about himself. It’s a coming-of-age story, really. It’s an allegorical tale about responsibility and making sacrifices for the ones we love.

A unique puzzle platformer that combines deep gameplay with emotional storytelling, “Ori and the Blind Forest” delivers a stunningly beautiful visual aesthetic that will warm even the coldest hearts. Running at 60 frames per second and in full 1080p, “Ori and the Blind Forest” will feature a wide-open world blended with “Metroidvania” style gameplay, allowing players to organically find the secrets and items that will help them progress.

“Ori and the Blind Forest” will be released on Xbox One and PC this Fall. 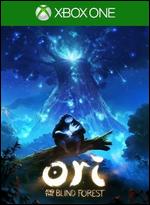