Riptide GP: Renegade is launching on Xbox One and Windows 10 in August or September.  It is the first game in the popular water racing series to be developed from the ground up for modern consoles and desktop PCs.

"With Riptide GP: Renegade, we’ve cranked up the action to make it more of a classic arcade racer," says CEO and Creative Director Matt Small.  "It still has the speed and dynamic water that players love.  But the races are bigger and more explosive, with transforming vehicles, interactive obstacles, and secret shortcuts." 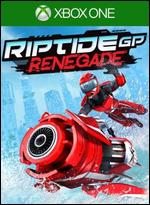