Along with this announcement, Sierra also announced plans to release a retail edition of King’s Quest: The Complete Collection, a bundle* containing all five chapters of the game with a bonus playable story epilogue that fans can download once available (Xbox One version).  The retail "complete collection" will release on October 25 as well.

For those who haven’t played any of the King’s Quest game chapters to date, the new King’s Quest reimagines the legend of King Graham for longtime fans and new generations alike. As an aging Graham shares the lost stories of his extraordinary youth with his curious granddaughter Gwendolyn, players will get to experience firsthand all the puzzles, places and personalities of a life of daring, danger and discovery. 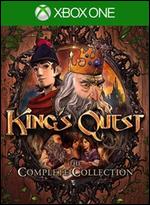