This past weekend Destiny revealed The Dawning, a three-week winter event beginning December 13th for all players of Destiny: Rise of Iron.

The Dawning will feature new Quests and Bounties to complete, a new Record Book filled with challenges to conquer, the return of Sparrow Racing League with two new tracks, one set on Earth and one set on Mercury, and a brand new game mode called Strike Scoring.

Check out the trailer below for a sneak peek at all that will be invoved: 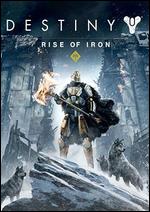