‘NeuroVoider’ Now Available on Xbox One

The twin-stick shooter NeuroVoider is now available on the Xbox One for fans to enjoy. The cyber futuristic game that mixes twin-stick shooting with RPG elements can now be enjoyed by fans for $13.99.

NeuroVoider brings forth thrilling gameplay in a world where gamers can shoot evil robots with powerful weapons including the nuclear rocket launcher. Additionally, players are able to battle through hordes of robots, boost their character, and defeat the master NeuroVoider to end this eternal war. They can also choose to take on the task by themselves or connect with up to four friends for some intense cooperative gameplay.

Want to see what the game looks like in action? Take a look at the video below (and yes we know it’s a PS4 trailer, but that is the link the PR sent us, so there): 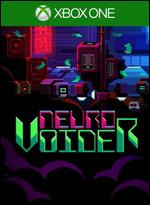