So, it seems that those crazy developers of Goat Simulator have more Goal love for you as they released Goat Simulator: Waste of Space on the Xbox One.  What is this you ask?

Terrifying enemies, striking from a hidden base, stalk a brave goat to new horizons. After the epic chase, the human settlers of a nearby colony managed to secure access to the Empire’s ultimate weapon, Pilgor, a fearless space-goat with enough raw headbutt power to destroy an entire planet. Or save an entire colony.

You can check out the video below for more of an understanding of what madness lies ahead: 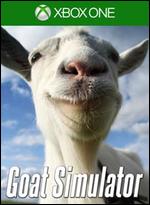