If you like GIRLS, GUNS, AUTOMOBILES and CAR CRASHES, then you’ll LOVE this game! Here is a short preview of what the game will be about:

"Crazy Taxi? Only the beginning. You may have thought that you’d seen car carnage in action, but it’s nothing when compared to the total havoc tossed upon innocent Hong Kong in the upcoming racer Wreckless. Actually, calling it a racer would be to give it less credit than it deserves. Driving platformer is the closest description we’ve got for the title, which mixes everything from jumping puzzles to four-wheeled sumo matches in with a title that already manages to beat games like Crazy Taxi and Midtown Madness at their own game. It also just happens to be the most graphically impressive Xbox title yet, pulling off visual effects so impressive you’ll think you’re watching a CG movie until you’ve had a chance to take out half of downtown Hong Kong for yourself."

The release date is set for Febuary 12, 2002. More details and screenshots, including movies anre coming soon.

I own Crazy Taxi, but never liked the realism level it had (too cartoon like), but this game will be playing on my XBox the day it comes out!

ALSO IN OTHER NEWS! I am working on giving you all a VERY SPECIAL PRESENT for christmas, but you’ll all just have to wait and see. None of my co-workers here even know about it. Want a hint? Then come back on November 2, 2001 and study the news post I’ll put up. You’ll find three hints in it. Till then, keep dreaming and guessing! 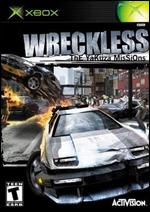