Digital Board Game "Armello" to get Boxed Release in March 2018

Publisher SOEDESCO has announced that a boxed special edition release for League of Geeks’ digital strategy board game Armello will be available in stores on March 13, 2018 and includes a physical soundtrack of the game.

LIke many people out there, you are probably wondering what the heck is Armello. It is is a grim fairytale that comes to life as a digital turn-based strategy board game. The swashbuckling adventure combines deep tactical card play, rich tabletop strategy, and a character role-playing system.

Armello features a gorgeous world which procedurally generates a new map each and every game, complete with a dynamic quest system. No two games are ever the same. The player quests, schemes, explores, casts spells and faces off against monsters and other players. There’s only one ultimate end goal in mind: storming the palace and becoming King or Queen of Armello.

Some of the games key features are as follows:

So, if all of the aboe intriques you, feel free to check out the trailer below to see the game in action: 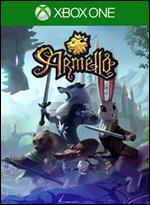