Regalia: Of Men and Monarchs Heading to Xbox One in 2018

There is an audience of die-hard fans who love jRPG’s on console, and it looks like one is heading to the Xbox One next year for fans to get their hands on.  It is called Regalia: Of Men and Monarchs.

The game draws inspiration from jRPG classics, but also delivers a modern mix of good old adventuring and dynamic storytelling. It’s a tactical RPG, but it’s actually a game about the restoration of your kingdom, bonding with vibrant characters met during your journey, embarking on the most peculiar quests possible, and bringing back your best jRPG moments in an up-to-date, accessible style.

It is said that it can also be a game about unforgettable, rewarding combats and well-thought tactics, but that’s for the player to decide - there’s always a possibility to tone down the difficulty level or even skip a battle if someone can’t wait to see what other plot-twists lay before him.

Regalia: Of Men and Monarchs has already made its mark amongst RPG fans during its PC launch, but we’re not stopping there. The Royal Edition is an enhanced version of the game that also contains all additional in-game content, including an endless mode and brand-new characters.

So, does this game interest you. If so great, if not, that’s ok, regardless, check out the trailer down below: 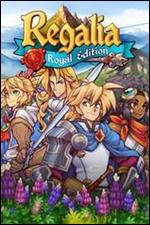