Flying Tigers: Shadows Over China Coming to Xbox One

Flying Tigers: Shadows Over China, a game based on the historical events of America’s secret volunteer squadrons that helped defend China in World War 2, has been confirmed for international release on Xbox One on Friday January 12th, 2018, and is now available for pre-order from the Xbox Store.

So, what can you expect from this game? Well, take a look at the feature list below:

Fly in Cockpit or Third-Person

Striking Rendition of the Far East 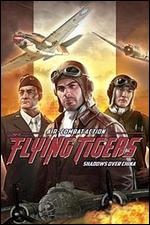