Simply put, the Kerbal Space Program Enhanced Edition is ow out for the Xbox One.  The game has been refined with consoles n mind.

In addition to the optimizations for console gameplay, Kerbal Space Program Enhanced Edition incorporates the Kerbal Space Program 1.2.2 “Loud and Clear” update from the PC version. This includes a broad range of improvements and features that boost the overall game experience from the prior console version, such as new communications methods between your HQ and spacecraft, more tweakable options while constructing rockets, a complete fuel system overhaul, and much more. As a thank you to the existing console community, all owners of the prior console version of Kerbal Space Program can redeem the Enhanced Edition for free

Take a look at the trailer below to see what to expect: 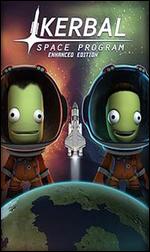